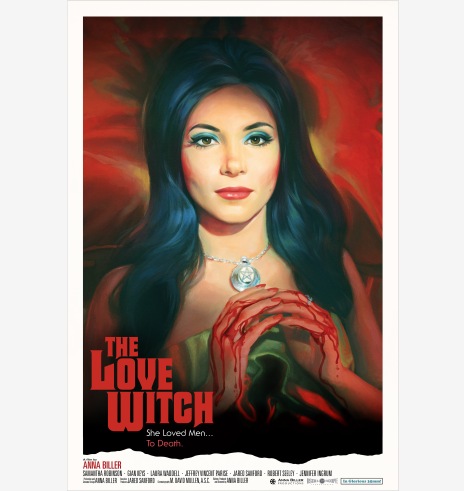 Every once in a while, a film comes along that defies audience expectations, even when the audience is more than prepared to indulge in whatever it offers. The Love Witch, from writer/director Anna Biller, is such a film: a gleefully malevolent celebration of thrillers and horror films from the 1960s and 70s…and so much more.

The Love Witch tells the story of Elaine (Samantha Robinson), a young witch who leaves San Francisco after the death of her ex-husband to start life anew in a small California town. Her project? To find a real man, one who embodies all that (she believes) masculinity should be. To do so, Elaine has elected to use “love magic” to become every male fantasy, to embody every dream and desire that an individual man wants, to fulfill his every wish. And she does, seducing a local college professor (Clive Ashborn), a friend’s husband (Jeffrey Vincent Parise), and police detective Griff (Gian Keys). The problem is that Elaine is just too good with her love magic, and the bodies begin to pile up with every lover Elaine takes.

Summarizing The Love Witch oversimplifies it, though, and ignores the extreme aestheticism and referentiality that the film relies on for its ideological outlook. The Love Witch is spectacularly subtle in its lack of subtlety. Elaine waxes eloquent about her philosophy surrounding love and witchcraft, much to the dismay of her friend Trish (Laura Widdell), who finds her attitudes strikingly anti-feminist. But Elaine’s speeches, like The Love Witch itself, conceals a deft sleight of hand as it reinforces and then punctures the male ego. Men are treated as almost childlike, slightly boring, basically useless, whose inability to look at women as people is a failing that they can’t overcome and that will ultimately destroy them. As Professor King sobs about never being able to find a woman to match his fantasy and his pain in remaining unfulfilled, the film punishes his view of women as objects simply by indulging him to the fullest extent.

Elaine’s deceased husband, remembered in voiceover, berates her for not losing weight, for not keeping the house clean enough, for not getting dinner on the table fast enough. In attempting to fulfill his fantasies of what she should be, Elaine ultimately kills him. She internalizes her husband’s psychological and emotional abuse, reconstituting herself as the ultimate female monster. Elaine’s extreme femininity destroys men by fulfilling their desires, by establishing an extreme gender binary in which they will never be “man enough” for the woman that they’ve created. She is a sort of female Frankenstein’s Monster, a creation of masculine hubris, who turns upon her creators and offers them everything they want.

It soon becomes apparent that all the women of the film are struggling under the weight of male expectations. But the women gain power in taking possession of their own objectification, rendering it a source of strength and directing back towards the dull (and singularly unattractive) men who demand so much from them. The male fantasy is reconstituted as a female one, the finding of a “real man,” with punishment meted out to those who do not fulfill that fantasy. Elaine is not a cypher or an image. She is a full person, wrapped the trappings of seductive femininity – thick makeup, a long black wig, garter belts and stockings – and is fully at home and invested in those trappings as part of her identity. She seeks a man to fulfill her fantasies, to provide her with the completion that men demand from her.

The Love Witch coats its complex battle of the sexes in a lush, referential mis-en-scene. Everything from costuming and makeup to the striking color coordination of its interior design, lighting, and photography interacts so as to produce a sense of a film out of time. While borrowing some of its aesthetic from numerous 1950s and 60s Technicolor films, The Love Witch produces a complex dialogue among those films, undermining their often anti-feminist bent by taking some of their arguments to an extreme.

Direct visual references abound: Alfred Hitchcock’s The Birds appears in the rear-projected driving sequences and the arrival of a “witch” in a small California town, a la Melanie Daniels. The plot nods to Bell, Book, and Candle, the 1958 film starring Kim Novak as a Greenwich Village witch who uses her powers to entrap Jimmy Stewart. Vertigo is another visual and thematic reference point: Elaine fulfills male fantasy in much the same way that Kim Novak’s Madeleine is forced to. But The Love Witch twists the theme, giving Elaine and her fellow witches the power in the relationships, becoming male fantasies only to exact control over those ideals. The shaping of a woman to masculine desires becomes a source of female power, not enslavement. Where Madeleine is punished for her deception, Elaine evades punishment, taking full possession of her sexual and emotional identity.

The Love Witch is a dark and sumptuous film that demands a viewer with a certain experience of retro cinema. It interacts so much with a very specific past that its cinematic antecedents – and therefore its meaning – may easily be lost in the shuffle. It is the male gaze, male control, that brings destruction and death. Elaine becomes every image of femininity, and by controlling that image, destroys the men who demand it. The film has a cinematic purity, so conversant with its own influences, yet so different from all of them that it manages to transcend the labels of pastiche, nostalgia, and parody. The Love Witch, much like Elaine, both is and is not exactly what it appears to be. And there are very few films that can lay claim to that.