*Evil Eye is available to stream on Shudder. 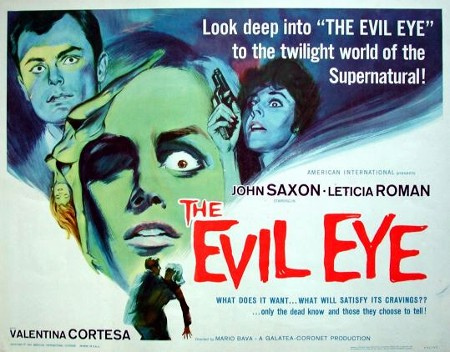 Continuing my probably unhealthy love affair with the films of Mario Bava: Evil Eye, Bava’s 1963 film that combines psychological horror, sexploitation, and some stylized horror to become the first true giallo. The Italian title is La ragazza che sapeva troppo, or: The Girl Who Knew Too Much, and that actually makes more sense than the American title tacked on, I suppose, to give the film more supernatural horror credentials that it doesn’t really have. The Girl Who Knew Too Much is very much in keeping with the film’s underlying satire on the films of Alfred Hitchcock, who is referenced a few times with tongue quite firmly in cheek.

Evil Eye opens with Nora Davis (Letícia Román) traveling to visit her ailing aunt in Rome. Nora’s obsessed with murder mysteries, turning her life into a romanticized pulp novel. After a rather nightmarish experience at the airport, she arrives at her aunt’s house to find the old lady seriously ill in bed, attended by the good-looking doctor Marcello (John Saxon). During a terrible storm that night, the phone and electricity flickers out just as Nora’s aunt goes into cardiac arrest, leading Nora on a desperate run through the rain down the Spanish steps to contact Marcello at the hospital. She’s mugged and knocked out, and awakens just in time to witness the violent stabbing of a young woman.

Nora spends the next few weeks going in and out of consciousness, attended by the kindly Marcello, who tells her that there was no murder victim: she must have been hallucinating. More or less recovered but still convinced that she witnessed a death, Nora attends her aunt’s funeral, where she runs into Laura Torrani (Valentina Cortese), a friend who lives in the Piazza di Spagna, right where the murder occurred. Rather than cutting Nora’s trip to Italy short, Laura offers to let the young American stay in her house. A series of somewhat confused events prompt Nora to believe that she’s still being pursued by the shadowy murderer she saw the night of the storm. She enlists Marcello’s help in tracking down the killer and possibly saving her life.

Evil Eye certainly earns its title as the first giallo – not overly bloody, it’s still a bizarre, nightmarish film, full of extreme emotions and stylized cinematography. The imagery emphasizes the psycho-sexual pulp of the details while not being fussed with developing a particularly coherent plot. The film wanders from point to point, introducing weird characters – like a doctor who convinces Nora that she has second sight – who suddenly vanish. Nora’s parade of bizarre experiences have a comedic edge to them, as Bava proves himself aware that this story is really just a ridiculous piece of camp.

The humor is the most unnerving element in Evil Eye. Nora’s hysterical terror is played partially for laughs, as in a scene where she prepares an elaborate trap to catch the killer. She’s also quite right to be scared, as the viewer knows, but Bava punctures some of his own stylization by calling attention to just how silly it all really is. Evil Eye, like Black Sabbath, bears more than passing resemblance to Corman films of the same era, taking the terror seriously while simultaneously allowing the audience to delight in the camp.

Evil Eye is a bit boring spots, especially the transition between Nora witnessing the murder and becoming convinced that she’s actually in danger. The secondary romance with Marcello, while amusing, takes up too much time, as do the pair’s endless investigations into the possibility that Nora actually had a vision of a murder that occurred ten years ago. The meandering, dream-like nature of the film might place it in the giallo tradition (anyone who has watched enough Argento knows that those films aren’t exactly coherent), but unfortunately that doesn’t make it altogether interesting.

I was told that Evil Eye was secondary Bava, and I’ll certainly go along with that assessment. While interesting for those of us who want to trace the foundations of Italian horror traditions, it’s not compelling enough to warrant a second viewing. Still, the combination of humor and the horror is so weird that I found myself giggling about the film long after I’d finished it. That’s as good a recommendation as any.

Evil Eye is streaming on Shudder, so there’s no excuse not to give it a shot.