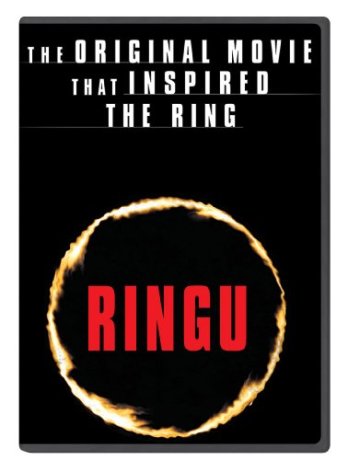 In movies as in life, look for originals. Rather than going for the American remake of The Ring, I decided to read some subtitles and watch the original Japanese Ringu first – mostly because the Japanese generally have a unique and profoundly disturbing outlook on ghosts, curses, and the trappings of horror. I must say that I was not disappointed.

Ringu begins with a surprisingly expositional sequence in which two teenage girls try to scare each other by talking about a mysterious videotape that, once watched, kills you a week later. When one of the girls dies and the other goes mad, it attracts the attention of a news organization and investigator Reiko (Nanako Matsushima), the aunt of Tomoko (Yuko Takeuchi), the girl who died. As Reiko delves into the origins of the curse story, she discovers that Tomoko and each of her friends who supposedly watched the tape died on the same day. This leads her finally to Izu and the cabin where Tomoko discovered the tape. When Reiko watches the strange video, she begins to believe in the curse, and seeks the help of her ex-husband Ryuji (Hiroyuki Sanada), a teacher with ESP, to discover a way to break the curse.

Due to its popularity in and out of Japan, Ringu bears many hallmarks and images that have become ingrained in world cinematic culture. It’s a testament to the film’s brilliance that it’s still scary, almost twenty years on. Although dependent on outmoded technology, the grainy nature of VHS, the ability to record long swathes of programming (or static) and keep it, have a bizarre and frightening quality to them. And Ringu keeps the visual horror to a minimum, relying instead on stories about spirits, whispered threats, vague rumors, and strange noises in the middle of the night to develop the tension. The “monster” of the film doesn’t appear until quite late, and then arrives with such a pop that it’s still impossible not to be frightened.

Japanese culture has a far different relationship to the spirit world than contemporary American culture – like its counterpart Ju-on (The Grudge), Ringu relies on complex concepts of ghosts and vengeful spirits that outstretch the modern period. The horror goes on, because it is based in betrayal or vengeance and not in demand for something that can be appeased. It can attach itself even to those who don’t deserve it, or who aren’t involved in the original violation, and will destroy them just as surely as the violators. That’s a terrifying notion.

Ringu definitely stands as my favorite (thus far) of the films I’ve seen this spooky season.