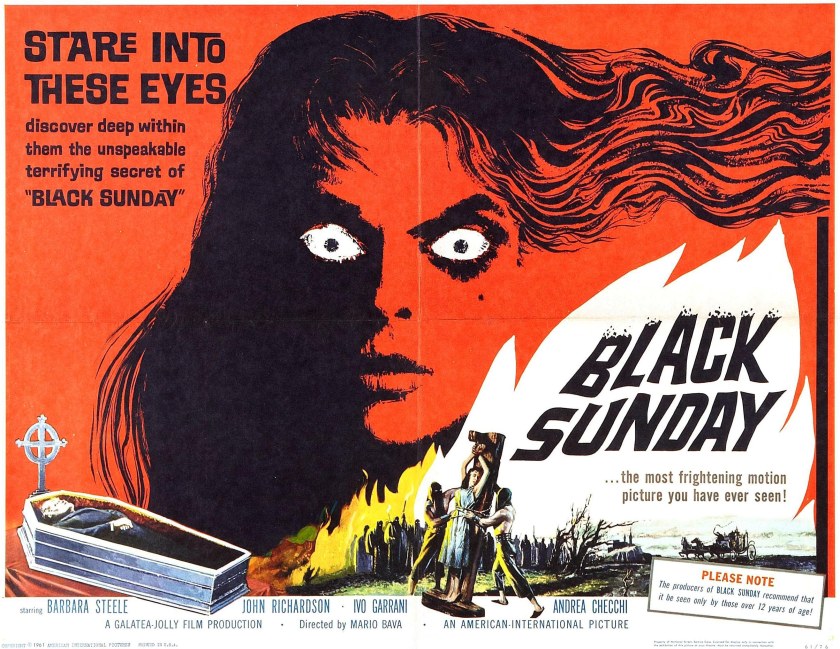 Mario Bava is another one of those classic horror filmmakers whose work I have (unforgivably) managed to miss. Considered the grand-daddy of Italian giallo – and one of the most influential of Italian horror artists – Bava married Corman-esque gothic sensibilities with more extreme (for 1960) horror gore. Black Sunday was one of his biggest critical and popular successes, and remains a touchstone for horror filmmakers to this day.

Black Sunday features Barbara Steele as Asa Vajda, a beautiful vampire/witch sentenced to death by her own brother. Following the execution of her lover Javuto (Arturo Dominici), Asa vows vengeance on her brother’s descendants, right before a devil’s mask studded with spikes is pounded into her flesh (the original title of the film was The Mask of Satan). Two hundred years later, we meet the descendants of the cursed family: Katia (Steele again), her father Prince Vajda (Ivo Garrani), and her brother Constantine (Enrico Olivieri). They become acquainted with two traveling doctors who stumble upon Asa’s tomb one stormy afternoon. Investigating the crypt, the elder doctor Thomas Kruvajan (Andrea Checchi) accidentally awakens Asa after cutting his hand and dripping blood on her corpse. This sets off a chain of events as Asa attempts to take back her life – and her beauty – while wreaking horrible vengeance on her descendants.

Black Sunday is very similar to a 60s Corman film, down to the involvement of Steele (who appeared in Corman’s The Pit and the Pendulum one year later), the gothic trappings, and the use of more gruesome violence than we expect from a black and white horror movie. Corpses ooze pus and blood, masks are nailed into living flesh, and witches are burned alive. While the black and white takes away some of the impact, the chiaroscuro is so deep and pulsating that it makes up for the lack of lurid splashes of red and green. The opening execution in particular is perfect horror filmmaking, the camera unflinching in documenting all the nastiness. In some ways, Black Sunday more closely approximates the weird sadism of 18th and 19th Century sensationalist literature than do the more sanitized versions of Frankenstein and Dracula produced by Universal.

Black Sunday fits right into the context of the horror films made by Corman in America and Hammer Studios in England, becoming a precursor to the far nastier films made by Dario Argento and Bava himself. And it’s a good film, if read in that context. But, Black Sunday misses the key ingredient that Corman managed with his Poe adaptations by failing to hire even one competent male actor as a lead. Vincent Price made Corman’s films wild-eyed and palatable, chewing the scenery with such loving gusto that one wants to enjoy the luridness just as much as he does. Neither the romantic lead John Richardson, playing the young doctor Andre, nor the actors in the villainous roles are of any real note. Steele is the real draw here, but a girl can only do so much.

Black Sunday is a perfectly enjoyable horror film. Does it make much sense? No. Is the acting all that great? Not really. But there’s a reason it’s a classic.

Black Sunday is available to stream on Shudder.