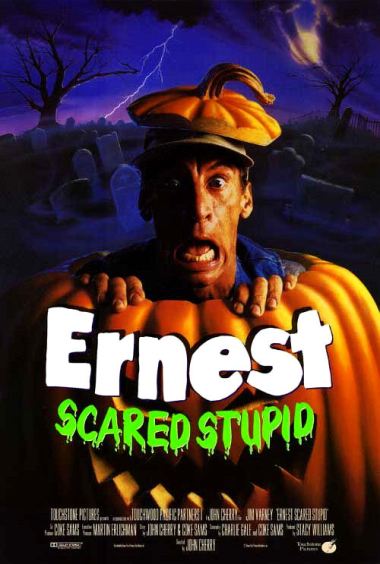 OK, if you don’t adore Ernest P. Worrell, then you obviously have not allowed joy and magic into your life. The creation of Jim Varney, Ernest began life as a character in TV ads, only to become so popular that he got his own TV show and, eventually, his own movie series. Is Ernest stupid? Yes. Are the movies silly? Totally. And therein lies their magic.

Ernest Scared Stupid is a later entry into the Ernest series, but it’s also my favorite. It opens in the late 19th Century with the townsfolk of Briarville, Missouri capturing a troll that has been stealing the souls of the town’s children. As they bury him beneath a sapling tree, the troll curses the town and town elder Phineas Worrell in particular. The troll promises to return, brought back to life by a Worrell. Flash forward to the present day, and Phineas’s descendant Ernest is now the local garbage man, spending his off-hours inventing ever more stupid time-saving devices and hanging out with the local children Kenny, Elizabeth, and Joey (Austin Agler, Shay Astar, and Alec Klapper). When the kids decide to build a treehouse to hide out from the local bullies, Ernest lends them a hand – only to inadvertently awaken the troll that slumbers beneath. Comedy horror ensues as the troll attempts to capture enough souls to awaken his sleeping troll army, and Ernest tries to stop him (with the help of local crazy lady Francis Hackmore, played an epic Eartha Kitt).

Ernest Scared Stupid is a kid’s movie very much in the vein of The Worst Witch, The Witches, and Hocus Pocus. The troll legitimately terrified me as a kid, to the degree that I spent a Halloween season checking under my bed. The film is less scary now, but still pretty funny as long as you’re willing to indulge in Varney’s light, mugging comedy. Ernest is more childlike than really stupid, a companion character to Pee-wee Herman, whose great love in life is his dog Rimshot. Most enjoyable are his secondary “split-personality” characters that he falls into suddenly and often inexplicably (my family still uses the line “Hairspray will fix anything” from this film). The characters lend a burst of surrealism to the film as Ernest does battle with the troll by shifting into the roles of a British explorer, World War II fighter pilot, and elderly grand-dame without blinking an eye.

Every once in a while, it’s nice to get away from dark terror and just watch a silly Halloween movie about candy and pumpkins. Ernest Scared Stupid still reminds me of my childhood, in the best possible way.