Izzy Lee’s other film at the Final Girl Berlin Film Festival is Rites of Vengeance, a sharp and sad short about three nuns who seek revenge on a priest after he commits a terrible sin.

As with Lee’s Innsmouth, this film focuses on the combination of monstrosity and the terrible beauty in female relationships, in this case with a far clearer moral universe. There’s no dialogue, just image and sound, resulting in a lyrical ballet that is shocking, satisfying, and just a little bit sad. The determination of the nuns (one of them is named “Sister Mercy”) to punish their priest’s sins is shocking at first, but the film adds a small twist at the end that cements the viewer’s sympathies. While the subject might be a bit pat nowadays, it’s nonetheless powerful.

As I’ve gone through these screeners from the Final Girls festival, I’ve grown increasingly convinced that female writers and directors are among the most interesting voices in horror, expanding an always unique genre’s viewpoint and developing new ways of telling stories (and new stories to tell). Horror has gone through many different permutations, but it has too often been male-dominated, with masculine perspectives and prerogatives prized while relegating women to the role either of monster or victim (or both). Here, women are the heroes, the victims, the manipulators, the psychos, the monsters, and the misunderstood villains. Simply putting a woman behind the camera alters the perspective, and certainly these directors all have something to say. Final girls no more – they’re the Final Women.

Rites of Vengeance (2017) is playing at the Final Girls Berlin Film Festival. 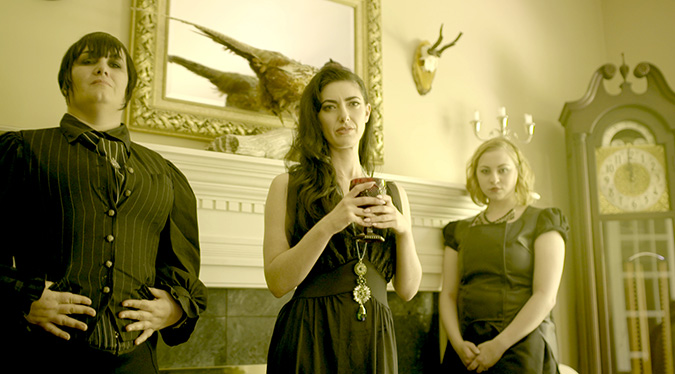 Innsmouth takes “The Shadow over Innsmouth,” one of H.P. Lovecraft’s more notorious stories, and boils it down to a murder mystery, as Detective Olmstead (Diana Porter) heads to the town of Innsmouth after discovering a woman’s body, murdered and apparently the host to fish eggs. The only clue is a photograph of the dead woman with the name “Innsmouth” written across the back. Not long after Olmstead’s arrival in the sleepy little community, she’s accosted and brought to see Alice Marsh (Tristan Risk), the daughter of Captain Marsh, the founder of Innsmouth.

The film breezily riffs on Lovecraft’s story-and happily avoids the story’s more problematic issues-and seeks to express a new horror all its own. It draws out some of the psycho-sexual undertones of much of Lovecraft while simultaneously manipulating those concepts, placing women and female characters central to the plot and allowing them full scope to possess, and subvert, their own monstrosity. The lead actors are excellent – especially the delightfully bizarre Tristan Risk as Alice Marsh, who fully taps into the gleeful malevolence and sexual threat of her villain.

Coming in at a scant ten minutes, it’s hard not to want the film to be longer and more developed, engaging more profoundly with the weird mythos it plays with and seeks to alter. Innsmouth feels almost unfinished, as though it wanted to do more with the creepy concepts, but didn’t have the time or space. Frankly, I enjoyed what I saw, but I really wanted more.

Innsmouth is showing June 10 at the Final Girls Berlin Film Festival as part of their Body Horror shorts program.