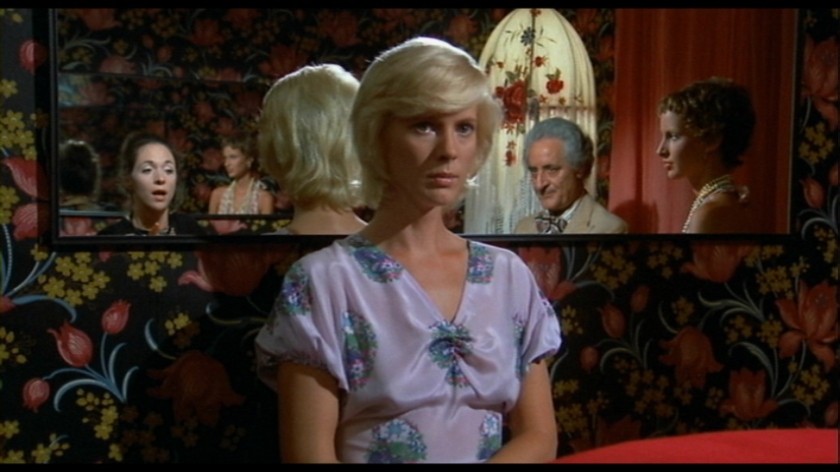 Giallo horror tends to run the gamut from artistic to exploitative, and often just combines the two into an unholy union that is at once profoundly uncomfortable and deeply enjoyable. One of the stranger works in the wide range of giallo films is The Perfume of the Lady in Black (the greatest title ever), from director Francisco Barilli, starring Mimsy Farmer as a perfumier in Rome who begins to hallucinate (or does she?) images from her childhood that center around a lady in black.

Farmer is Silvia, a talented chemist who enjoys making perfume, going out with her boyfriend Roberto (Maurizio Bonuglio), and hanging out with his friends, including a professor (Jho Jenkins) with an interest in black magic and the occult. But things begin to get weird when she smells a new perfume and begins to hallucinate a woman, all dressed in black. As the hallucinations get more intense, recalling Silvia’s childhood, her deceased father, and her mother’s old lover, she also begins to believe that she’s being stalked by men in dark trench coats. At the behest of her friend Francesca (Donna Jordan), Silvia goes to a blind psychic, who brings up even more past memories, inspiring another flood of hallucinations. What’s real and what’s Silvia’s psychosis become more and more intertwined, exacerbated by the machinations of her strange neighbor, and the mysterious people who may or may not be following her.

Like many giallo horrors, the focus is more on the aesthetic than the actual plot, which telegraphs the solution to its mystery so clearly that it almost isn’t necessary. The garish seventies’ colors and weird character quirks – like a continuous emphasis on hippos that is just confounding – make for the entertainment value here. Rooms painted bright blue, yellow dresses that are just too yellow, pinks that conflict with purples, haunting music that dogs Silvia’s steps—these are the trappings of the weird. There are the usual elements of the occult and psychosis, as Silvia’s belief that she’s being bewitched co-mingles with her hallucinations, which are either repressed memories, are realities being perpetrated against her by some unknown assailant, or are the result of something more supernatural. What’s unnerving about the film is how difficult it is to completely understand what’s going on, or why. The ending is at once predictable and utterly shocking, and I doubt that a rewatch would be able to place it in proper context. It doesn’t make sense, which is half the fun.

In some ways, though, The Perfume of the Lady in Black needed to be more extreme, to indulge its tendencies to excess rather than attempt to tell a coherent story. What sets films by Bava, Argento, or Fulci off is the willingness to go all in on the aesthetics and overwhelm the viewer with imagery such that we almost forget there is a plot. This film doesn’t go far enough—there’s actually very little violence, and the most violent scene (of an attempted rape) comes off as too serious to be particularly enjoyable. The overlapping of reality and psychological horror is well done, but it could be emphasized more. I wanted more hallucinatory images in a film about hallucinations.

The Perfume of the Lady in Black is available to stream on Amazon Prime.