The Tomb of Ligeia 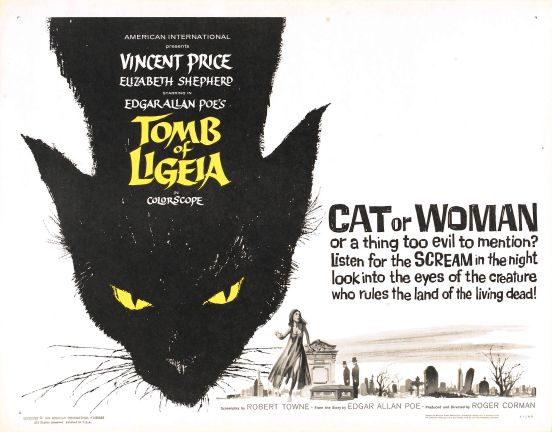 “I just tried to kill a cat with a head of cabbage!” – Verden Fell (Vincent Price)

Vincent Price and director/producer Roger Corman made eight films based on the stories of Edgar Allen Poe, all of them in bright Technicolor with overwrought scripts and hammy performances from a central cast of talented B-movie stars. The Tomb of Ligeia is the last of the cycle and in some ways the best, featuring one of Price’s most effective and pathetic performances.

The story centers around Verden Fell (Price), who opens the film by burying his wife Ligeia (Elizabeth Shepherd). We’re told that Ligeia was a woman of great will and passions, who promises her husband on her death-bed that she will not stay buried. This being an Edgar Allen Poe adaptation, we can expect her to keep that promise. Fast forward several years and Verden is still living at the abbey he shared with his wife (she’s buried in the neighboring churchyard). The arrival of his beautiful neighbor Rowena (also Shepherd) prompts Verden to reevaluate his priorities. He falls for Rowena and the pair embark upon a marriage that everyone pretty much knows is doomed. Ligeia might be dead and buried, but she’s not going to let her husband go that easily.

Like most Corman/Poe stories, The Tomb of Ligeia is less about its plot and more about its aesthetics. The abbey that Verden and his wives inhabit is run-down, strewn with cobwebs, and haunted by a black cat that quickly become a central character to the story. Secret passages, haunted ruins, a bell-tower, winding staircases leading to hidden secrets – it’s all beautifully predictable for this type of film, and we know that before long family secrets will be revealed and some hideous discoveries made. 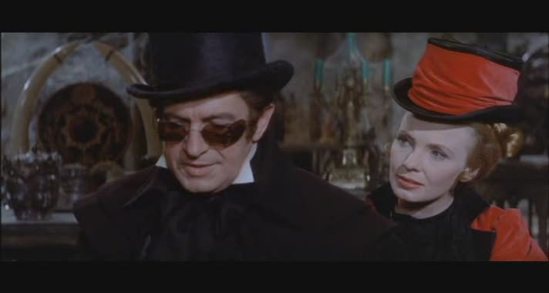 At the center of the film is the excellent cast, not the least of them being Price and Shepherd. Price is a tad old for the part he plays, but he goes into it with gusto, his sad, haunted expression making the audience feel for a man who might very well have been made out to be a monster. Verden fights desperately to free himself from the morbid obsession with his dead wife, who swore to him on her death-bed that he would always be her husband. In this case, he’s as much a victim of Ligeia’s indomitable will as everyone else, and Price plays him with pathetic beauty.

Elizabeth Shepherd, meanwhile, takes on the dual role of the Lady Rowena and Ligeia herself. Both are headstrong, powerful women, unwilling to sacrifice the man that they love – or, rather, the man that they want. There’s a certain element of power play going on here, and in some way the film is more about the battle between Rowena and Ligeia than it is about Verden. (I can also never pass up an Avengers connection: Shepherd was the first actress cast as Mrs. Emma Peel on The Avengers, and even filmed 1.5 episodes before being dismissed from the production under rather vague circumstances. Watching her here, I couldn’t help but wonder how she might have compared to Diana Rigg).

Where The Tomb of Ligeia fails is in its conclusion. The final sequence, once we get there, is very effective, but the plot feels confused, with much of the exposition packed into the last ten minutes. There we discover the “truth” about Ligeia and Verden’s obsession with her and are subjected to several short climaxes before we get to the real ending. As such, the film feels curiously weighted at the conclusion, as though Corman and scriptwriter Robert Towne (of later Chinatown fame) realized that they didn’t have an ending to the story and so tacked on three. That being said, however, it does provide one of the more epic final battles in any of Corman’s films, vastly outstripping The Pit and the Pendulum for sheer madness.

No one watches a Corman/Poe film for excellent storytelling; we watch it for the crazed camp, the wild-eyed villains and tortured heroes, the heroines bathed in fire and blood. Corman was the King of B-Movies, one of the best directors to tap into Price’s intensity and make even his villains fascinating and sympathetic. The Tomb of Ligeia is not a great film, but it is great fun.