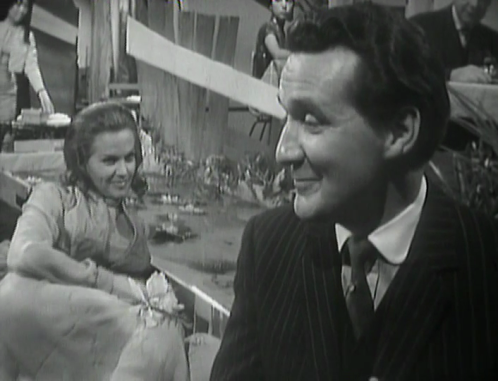 Following my rather violent reaction to The Avengers Lost Episodes yesterday, I thought it a good idea to sit down and watch an episode of my favorite series that I actually like. The Golden Fleece, while far from the greatest of the Cathy Gale era, remains one of my favorites.

Steed and Cathy enter the world of international gold smuggling as they connect a Chinese restaurant and an army base with a gold-smuggling ring run through Hong Kong. Their investigation leads them to three army officers working out of a base in Aldershot, where Cathy obtains a position curating the military museum. The convoluted plot also involves an ex-corporal suspected of funneling the ring’s funds to his own pocket, prompting the arrival of Mr. Lo (Robert Lee), who threatens to shut down the whole operation unless he gets his money back.

The Golden Fleece is a well-balanced episode, letting the viewer in on the machinations of the three army officers and their Hong Kong connections as well as Steed and Cathy’s investigation. The excellent supporting cast includes Warren Mitchell, who will later go on to play the amusing Ambassador Brodny in the Emma Peel era. The three officers, in fact, are among the most sympathetic of Avengers villains (if they can really be called that), and it’s difficult not to cheer for them, even when their activities lead to murder.

The most enjoyable part of this episode is the relationship between Steed and Cathy. They appear to have reached an equilibrium of sorts, dining together, going home together, and spending a great deal of their leisure time in each other’s apartments. Cathy arrives at Steed’s flat one morning just to lie down on his tiger skin rug and read a magazine – an indication of their increasing friendship and domestic relationship.  That Steed still persists in manipulating her is a source of friction, as it appears that Cathy would willingly help him anyways.

There’s also a subtle but poignant moment when Cathy, looking around the military museum, notices a type of gun she used to use in Kenya. Major Ruse (Tenniel Evans) remarks that it was used in the Mau Mau uprising and laments the need for “police actions.” While it is never expressly stated in the series, there are several indications that Cathy’s husband was killed in the uprising, and the faraway expression on Cathy’s face bears that out.

All in all, The Golden Fleece combines drama and comedy that on balance make some of the best Avengers episodes true classics.