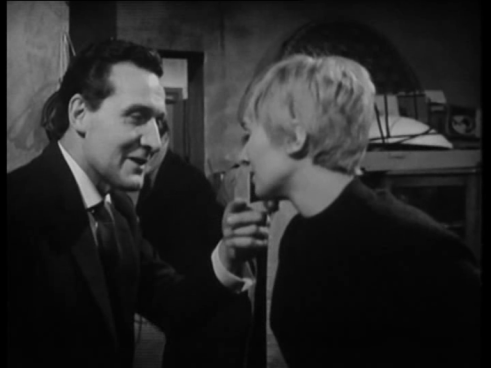 With Cathy Gale saving the world from exploding stars, what is there for Venus Smith to do except wander an amusement park? Venus returns in her penultimate episode Man in the Mirror to assist Steed in proving that a cipher expert who recently committed suicide might not actually be dead.

The impetus for the investigation comes when Venus wanders the amusement park where the man committed suicide and happens to snap a picture of him in a funhouse mirror – several days after he’s supposed to be dead. This is enough to launch her and Steed into the weird world of the amusement park, where they discover family drama, people held hostage, and a possible treacherous plot in the offing.

Steed’s superiors make a few appearances during the second and third seasons of The Avengers (and thankfully disappear for the entire Mrs. Peel series). This time Steed finds himself somewhat at odd with his boss, who accuses him in the opening scenes of being a lone wolf, declining to play by the rules. It’s a neat little scene, and highlights what makes Steed so likable in the early seasons – while he might dress the part of a traditionalist, he’s quite far from it.

Venus, meanwhile, has fully transitioned into a teenager. When Steed brings her back to the amusement park, she’s carrying a teddy bear and chewing on a candy-apple. The dynamic between them has ceased to carry any possible sexual implications – Steed not only towers over her physically, but she’s apparently regressed from a twenty-year-old to a seventeen year old. Her continued naiveté about Steed’s profession remains inexplicable – this is the fifth time he’s involved her in a case, and a fifth time that she’s gotten in too deep.

The uncertainty of Venus’s character might very well be what got her eliminated from The Avengers altogether. There’s no ambiguity between Steed and Cathy on a professional level – she’s well aware of his job, and he never tries to fool her about it. Yet Venus goes between having a competent understanding of Steed’s work, and an apparent ignorance that seems laughable this late in the game. The youth/age dynamic (which will unfortunately reappear in the much later Tara King season) means that there’s little chance for parity between them – Venus is far too much of a child to be a proper partner.

There are some enjoyable moments in Man in the Mirror, however. The villains capture Venus at the climax, revealing one or two salient details about their plot that on first viewing quite surprised me. Steed’s dedication to protecting her is quite sweet, even if he does always get her into trouble in the first place. While it’s a far cry from my favorite Venus Smith episode, Man in the Mirror can make for a diverting 50 minutes.