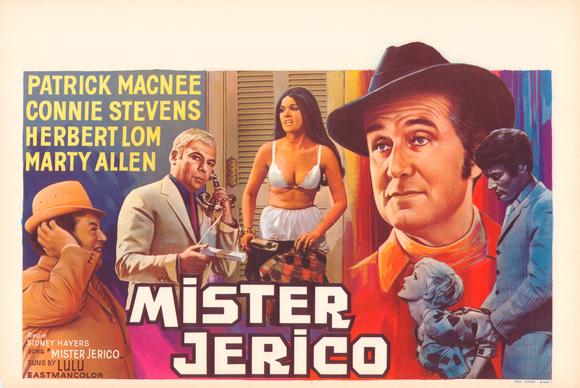 Following the conclusion of The Avengers in 1969, a number of the cast and crew decided it was a good idea to take themselves off to the sea and sand and make a movie. The result was Mister Jerico, intended as a TV pilot that never got off the ground. It was released theatrically in the United Kingdom, and then as a TV movie in the U.S.

Patrick Macnee is Dudley Jerico – whose theme song leaves a little to be desired – a thief/con-man (with scruples) out to con a nasty millionaire Russo (played by the always nasty, always enjoyable Herbert Lom) out of a few million dollars. Jerico’s pal Wally (Marty Allen) helps with the endeavor – and there is of course the lovely Susan Grey (Connie Stevens), Russo’s secretary and Dudley’s love interest. Things get complicated when a mysterious French woman pops up trying to pull the same caper, involving the theft and sale of a rare diamond.

Mister Jerico is one of those charming and fluffy capers that the 1960s did well, quite similar to the higher- budgeted Gambit or How to Steal a Million. The palette is sun-soaked, the plot buoyant and just this side of ridiculous. The second half of the film in particular moves along at a nice pace, complicating matters without making anything seem too serious. If you think too deeply about the story, it will all appear very nonsensical, but this is a stylized caper film not intended for deeper scrutiny. It’s a surface film and as such it’s quite enjoyable. 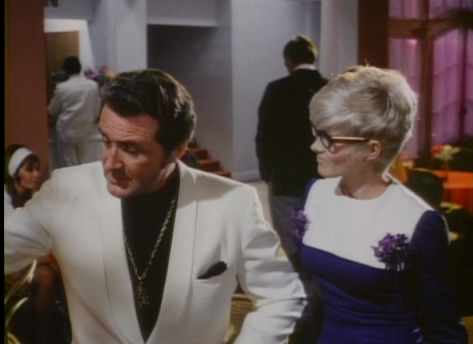 Patrick Macnee is a likable screen presence and good light comedian, playing Jerico with the same dash of wit and energy that he possessed as John Steed. He’s a somewhat limited actor, but works within those limitations to create a charming, erudite con man.  His wardrobe is also nothing short of spectacular – if that’s the word for it – with bright prints, flashy trousers, and a blue velvet fedora that Superfly would be proud of. Herbert Lom is an excellent counterpoint: a sharp, venal heavy, who fully deserves anything the cons can throw at him.

Connie Stevens meanwhile seems a touch out of place as Susan. While she and Macnee have heat, her somewhat breathy line delivery and slight air-headedness don’t quite gel with her role, which becomes more complex  as the film goes on. Still, she’s not an uninteresting leading lady, though I could name about ten actresses that might have played the light part with a bit more depth.

Mister Jerico is the height of 1960s silliness, and as long as one expects nothing more it makes for a diverting few hours. While I understand why it was never picked up as a pilot, it’s no less ridiculous than The Prisoner, The Persuaders, or any other stylized TV show from the same period. I have a soft spot for stylized films – all the more so if they happen to feature actors and actresses I enjoy. While not quite high camp, Mister Jerico is a lot of fun.