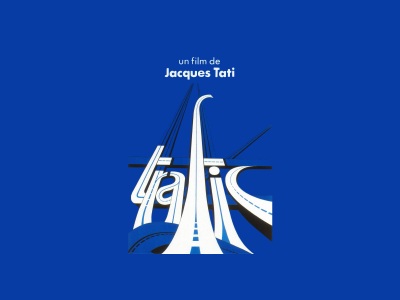 Jacques Tati’s final Hulot film Trafic (1971)is not the filmmaker’s greatest … but that’s like saying that a particular vintage of a fine wine is not quite as good as the years before.  It’s still a remarkable achievement, and a pleasurable experience.

For fans of Tati, Trafic takes on an immediately recognizable conceit.  The plot, such as it is, revolves around Monsieur Hulot – Tati’s gentle and clownish character who already appeared in M. Hulot’s Holiday, Mon Oncle, and Playtime – now a designer for car company Altra.  Hulot and truckdriver Marcel (Marcel Fraval) have to take a truck containing a recreational vehicle to an auto show in Amsterdam.  That’s it.  That’s the whole plot.

Tati’s films are never plot driven, but this one probably even less than the others.  The truck consistently breaks down, runs out of gas, or gets into trouble with the cops and border patrol.  PR woman Maria (Maria Kimberly) throws hissy fits, but gradually softens as her journey through the French and Dutch countryside transforms her from the clichéd high-fashion maven to a calmer, happier human being.  Intercut with Hulot’s journey is the auto show itself, with typical Tati sight and sound gags that include comical juxtapositions of car trunks opening and closing, the construction of a ‘forest’ in the middle of the show, and small boys who keep stealing car brochures. 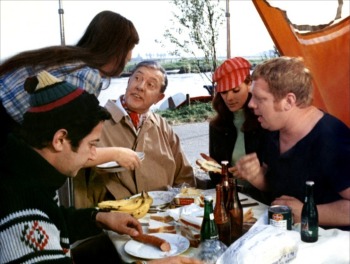 None of the gags fall flat, but some of them are repeats of Tati’s visual or aural puns from Playtime – widely considered the filmmaker’s masterpiece.  Some of the best, though, are hilarious: the traffic collision begun by the Altra truck, Hulot’s sprint through the fields when he goes looking for gas, the extended sequence at border control as Hulot and Marcel exhibit to the Dutch police all the accoutrements of their car, the ‘moonwalk’ performance of Marcel and a car mechanic (Tony Knepper) after watching a rocketship take off.  The character development, particularly of Maria, is subtle but touching: her constant outfit changes indicating the relaxation of her character as she goes from haute-couture to a leather jacket and jeans.  If there’s a problem, it’s that there isn’t enough Hulot, whose gentility and decency permeates the other Tati films to a far greater extent.

But that’s a minor quibble in what is ultimately a beautiful, funny film.  Hulot is there, after all.  What makes Tati’s film so wonderful – I don’t know how else to describe them – is his obvious love of humanity.  Here is the human condition, in all its weird glory, interacting with each other and with technology.  Tati makes no judgements; technology is neither the enemy nor the indicator of human progress.  It’s funny and bizarre, but it only serves to highlight how wonderfully eccentric human beings can be.  Technology mirrors and accentuates the people it serves – or fails to serve.  Windshield wipers imitate drivers; cars limp and groan when they’ve lost a wheel; a traffic jam sends people out into the rain.

If Tati preaches anything at all, he preaches a gospel of humanity.  His Hulot is a bit of a buffoon, but he’s a well-meaning buffoon, a man who is not superior to anyone, who is never at odds with the world.  Even when he’s fired from his job, he shrugs his shoulders and moves on, off into the rain with the newly happy Maria and her dustmop dog.

Trafic does not represent the crowning glory of Tati’s achievement, but it is a fitting farewell to a character as gentle and humorous as the Little Tramp or Buster Keaton.  All through the three previous Hulot films, Hulot seemed to just narrowly miss getting the girl, always rejected by the adult society that he really has no problem with.  At the end of Trafic, Hulot does not walk off into the sunset; he walks off into the rain with a grand smile on his face and Maria on his arm, crowded together under the perpetual umbrella.  For a moment we almost lose Hulot as he vanishes into the underground, but suddenly he returns, borne back on a tide of humanity.

The final image is of a massive traffic jam with umbrellas flitting here and there.  The people, it seems, have left their cars and crowded beneath umbrellas together – a sea of Hulots in the midst of the technological wilderness.