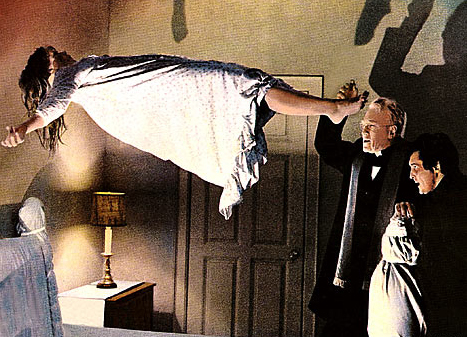 I’m a terrible horror fan.  26 years old and I had never seen The Exorcist until this week.  Terrible.  I blame the educational system.

You know the plot, but to reiterate: Regan (Linda Blair), a pretty normal adolescent girl and daughter of an actress (Ellen Burstyn), is possessed by … well, by Satan, apparently, although I have my doubts.  Call in Father Damian (Jason Miller) and Father Merrin (Max von Sydow) to exorcise the demon.

The Exorcist is one of those films that I fear has not aged terribly well.  This is not to say that it’s not a great film – it is.  The performances are uniformly excellent, the special effects spectacular for their time period, the script intelligent (and humorous), and the directing above standard.  But for all that, I must admit that I did not find it particularly scary.  The scares have been done so many times, in parody and out of it, that I saw them coming a mile away.  Regan’s spinning head and vomiting green goo are both pretty freaky in terms of effects, but not in terms of scariness.  More troubling is her tendency to swear at everyone and stab herself with a crucifix, but even that, while shocking, is not particularly frightening. What’s more, I was never convinced that this was really Satan.   Doesn’t the Prince of Darkness have better things to do than inhabit a little girl’s body? Shouldn’t he be trying to overthrow the world, or bring about the Apocalypse, or teach people at crossroads how to play guitar?

Perhaps the point is that it’s not Satan, but just a rather mischievous demon who got bored.  In any case, it’s a great film, but it failed to give me even a single bad dream.  I must admit that I expect more from the Fiend.  At least some more colorful curses than just telling priests to fuck off.