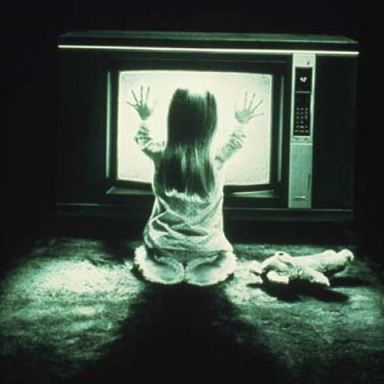 You want to know where Paranormal Activity got it? Poltergeist.  With the combined might of Steven Spielberg (before he got too warm and fuzzy) and Tobe Hooper behind it, Poltergeist is one of the first, and best, of the suburban haunted house films.  A nice suburban house nice suburban neighborhood transforms into a portal to hell.  It all starts out innocently enough, with the little girl Carol Anne (Heather O’Rourke) sleepwalking and talking to the static on the TV.  Then something stacks all the kitchen chairs.  The beginning of the haunting is actually treated with a sort of glee, as the mother Diane (Jobeth Williams) experiments with the moving furniture in the kitchen. Then the “TV people” come and take Carol Anne away through the closet and things get much more serious.

I’ve seen Poltergeist numerous times now and I always forget just how damn good it is.  It’s a commentary on how disrespectful and thoughtless modernity can be.  It calls into question just how safe we are in our planned communities, how little we think of the past and what will burst through at a moment’s notice.  The adults initially treat the haunting as a game, until the most basic fear of every parent – their child being taken – is played upon with brilliant precision.

Poltergeist makes use of all the trappings of suburban life.  The dead come back because they’ve been disturbed when the planned community is  built on top of a cemetery.  It’s the revenge of the ancient on the unthinking, disbelieving modern, and the terrors are as primordial as they come.

There are few viewers who don’t relate to those childish nighttime fears, like your toys are trying to kill you, or the tree outside your window is going to grab you out of bed.  The very fact that the entrance to the other world is in a child’s closet is part of the most basic fears of childhood.  There is something in the closet, and it’s coming for you.