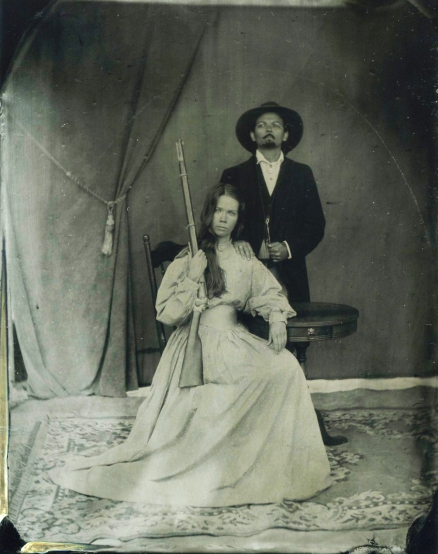 Writer/director Whitney Hamilton’s film Union is an ambitious, intriguing work that attempts to navigate some difficult waters, made more difficult by a limited budget. It opens with the near-death of Henry Keiler (Hamilton), a Confederate soldier who’s shot, captured, and taken to a Union Army infirmary in Virginia to await execution. When the doctor tends to Henry’s wounds, it’s discovered that he’s a woman, Grace, posing as her dead brother to fight in his place. Through the machinations of her fiancé, Henry survives, only to escape again and try to make his way back to the woman (Virginia Newcomb) that he left behind.

Union begins with a briefing about the more than four hundred women who posed as men during the Civil War, on both sides, in order to fight, and purports to tell one of their stories. The complexity of gender, how it’s perceived, and who suffers because of it is an intriguing concept for a Civil War narrative, and in this element, Union acquits itself quite well. It’s never revealed for how long Henry has been posing, or when it started, but the fluidity of Hamilton’s performance, and Henry’s romance with Virginia, makes for the most interesting scenes of the film. The addition of indigenous concepts—I want to say Cherokee, but I’m not entirely certain on that point—of gender and its mutability make for an intriguing critique of white Western essentialism, especially as female soldiers are executed when discovered.

Union is a high-budget concept with a low budget, meaning that the film has to rely on some deft camerawork and action happening off screen in order to establish verisimilitude. The concept is a fascinating one, but there are sections the narrative suddenly elides over, to its detriment. Is Henry/Grace engaged to the Union captain who captures her? Does Henry know the widow from before? What about the scenes of a wife and child? The movement between timelines confuses the issue, making it difficult to follow the tribulations of the characters and understand their relationships, as though missing half the story.

Union must also overcome the patchy nature of its acting and story structure. Hamilton and Newcomb acquit themselves well, especially in their scenes together, but some of the others read their lines with a stiltedness that belies a discomfort. There’s little tension in Henry’s potential discovery—he’s protected on all sides, and somehow manages to hide, get married, and work a farm, without the Union soldiers being any the wiser. The elision over chronology and an imprecise indication of character relationships means that the film’s denouement, as Henry goes looking for a son stolen by the Union army, feels more like an add on than a central conceit. It was not always easy to follow the plot or understand, for instance, why the Union Army suddenly stops looking for Henry, why no one seems to notice that a Confederate soldier has been holed up in a local farm, or why Henry heads all the way to Canada to find a child taken from Virginia.

The central interrogation of transgender issues and the mutable nature of gender is what lends Union its strength (though, God knows why we must continue to treat Confederates as the scrappy underdog and Unionists as a malicious invading force). The most effective sections of the film occur after Henry has come home and begun to work the land alongside his wife. The digressions into concepts of gender, its fluidity, and the indigenous acceptance and even veneration of those who have “a man and a woman’s soul” in one person are interesting enough, though there are places where it begins to veer too far into “native mysticism” territory, as the group that helps to protect and support Henry constantly pop up across the narrative to be certain everything goes well. But these elements have the capacity to lift certain sections of Union above its limitations.

All in all, Union is a patchwork film, some of it excellent and intriguing in concept and execution, some of it severely lacking. It’s such a game attempt to bring to light an underdiscussed element of Civil War history, especially in terms of the issues of gender both in that time and our own, that I hesitate to dismiss it outright. Its weakness lies in not establishing strong enough narrative stakes or making clear its character relationships at the outset, leaving the viewer to work out things for themselves in increasingly confused and confusing ways. It’s based on Hamilton’s original short film, which might be more cohesive, and thus perhaps needed another editorial pass. Still, there is something in here that deserves to be paid attention to, and Union is far from a waste of time.

Union is available to stream on VOD, including Amazon and YouTube.