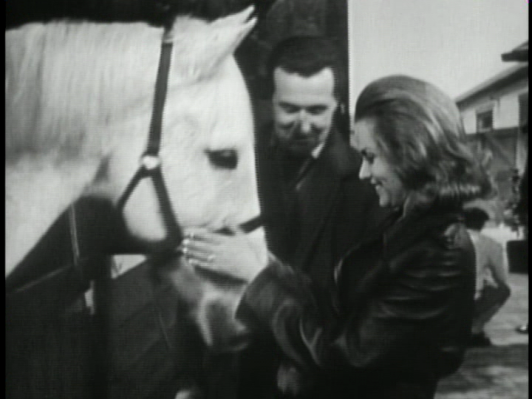 Trojan Horse brings us to the stables and the racetrack, and marks one of the greatest oversights of the series: not getting more use out of John Steed’s name. Although his equestrian derivation is briefly, and humorously, referenced in The Little Wonders, I find it shocking that Trojan Horse manages to get all the way through a very horsey episode, complete with discussion of what a good rider Steed is, without once alighting on the fact that our hero’s last name is synonymous with that of a particularly virile male horse.

That little disappointment out of the way, Trojan Horse is a middling episode that neither impresses or bores. Steed arrives at Meadows, ostensibly to look after a horse named Sebastian that’s owned by an Arab sheik. As always, there’s more to it than that. The Ministry has managed to trace some high profile murders back to the stables, and Steed is there to investigate. He enlists Cathy to help with the bookmaking side of things, and she’s promptly employed by Tony Heuston (the deliciously smarmy T.P. McKenna) in a scene that says much about Cathy’s expansive talents, and even more about Honor Blackman’s memory. In the process, Steed and Cathy begin to uncover an assassination ring at the stables.

As with many Avengers episodes, the plot of Trojan Horse leaves a little to be desired. There’s plenty of intrigue, but the initial set-up of Meadows as the site for a kind of Murder Inc. run by Heuston and his cronies simply does not make sense. There are some fun scenes, including Steed teasing Cathy about her excitement over horse-racing, and a rather introspective discussion between Cathy and Heuston about his past. Heuston is a combination of oozing charm and villainy, but there is something sympathetic in the way that McKenna plays him that makes him more complicated than many an Avengers villain. Given that our two heroes are rarely in the same scene in Trojan Horse, having a strong villain for Cathy to interact with raises the episode just a little.

All in all, Trojan Horse probably should have been much better than it is. It has the makings of a good episode, with an intriguing setting and some quality villains, but the script never quite gets there.