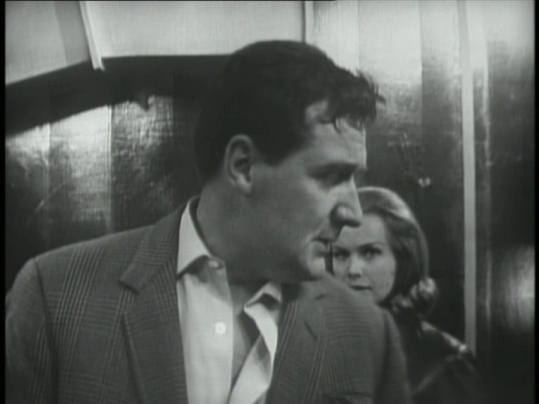 Directly following the disturbing doppelgänger episode The Man with Two Shadows (read about that one next week), The Nutshell features another development in the Steed and Cathy relationship, straining it almost to the breaking point. The pair are called in to investigate a break-in and possible sale of government information from a secret nuclear bunker called Nutshell. Steed’s odd behavior concerning the investigation begins to worry Cathy, however – especially when it’s discovered that he’s had several meetings with the girl who broke into the facility. Steed is arrested for espionage and imprisoned at Nutshell, where he undergoes torture at the hands of his own security organization.

The Nutshell plunges us deep into the heart of the spy organization that Steed works for, drawing into question his loyalty. Following so close on an episode that ends semi-ambiguously in terms of Steed’s identity and his relationship to Cathy, The Nutshell focuses tightly on the character relationships and what the pair don’t tell each other. Steed is tortured by the very people he has sworn loyalty to and interrogated without trial. At one point, Cathy asks a representative of Nutshell whether they obey the same moral laws as the rest of the world, to which she is given the curt reply that the only crime in Nutshell is endangering security. It’s a murky world, and one which Cathy is evidently not comfortable with. She watches Steed’s torture on closed-circuit cameras, and the acute nature of her own suffering reflects in Blackman’s face.

Steed, meanwhile, further complicates the viewer’s feelings about him. Some strong editing of scenes means that the audience is kept guessing as to his motives. He and Cathy engage in several discussions about their nature of their work, revealing something of Steed’s personal politics and the strain his job puts on him. Unlike James Bond, Steed was never a character who seems superhuman. If anything, he’s more flawed and less sure of himself at times than Bond, but has the makings of a true hero beneath it all. Macnee is always a good comic actor, but here he shows that he can play drama just as well.

The Nutshell represents the best of Season 3 in terms of pacing and performance. There’s barely a misstep – a remarkable feat for an episode of live TV with numerous location changes and complicated sets. The secondary cast, including Avengers regulars John Cater and Patricia Haines, is excellent, as cold and precise a set of bureaucrats as you can ask for. If there’s a single problem with the episode, it’s the somewhat perfunctory conclusion which, following a very intense series of events, feels a little sudden and anti-climactic. However, that’s a small quibble in what is otherwise a superb episode.