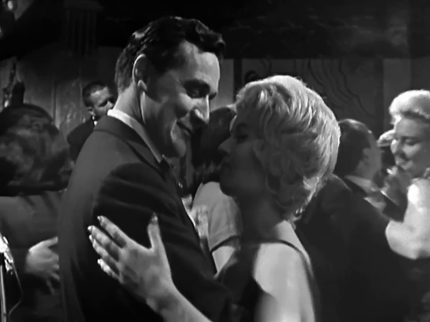 The Decapod introduces the world to Miss Venus Smith (Julie Stevens), who will change a great deal over the course of the six episodes she appears in (most notably getting a haircut and acting more and more like a teenager). Here she assists (to use the term loosely) Steed in hunting down a masked assassin out to get Yakob Borb (Paul Stassino), the leader of a Balkan Republic in Britain for trade negotiations. This leads both Steed and Venus into the odd world of amateur wrestling when one of Borb’s bodyguards is murdered in the ring by the mysterious Decapod.

The Decapod represents this season’s first proper descent into the underworld. Venus works at a London nightclub that Steed frequents. He manipulates her into becoming Borb’s secretary (after his first one is murdered) by telling her that Borb wants to sponsor a singing tour. While Venus seems a bit too naive to be believed, she as yet has no reason not to trust Steed, who is at his fast-talking, charming best.  Their relationship is a tad unclear, and will become less so as Julie Stevens’ tenure with The Avengers goes on. This episodes implies a sexual relationship, or at least flirtation, with Steed making very free with the innuendo (and the cards down Venus’s cleavage).

The Decapod is actually a strong episode, despite featuring one of Steed’s most lackluster partners. The wrestling sequences entertain, as does Paul Stassino’s smarmy performance as Borb. Because of the constrictions of live television, most of the actors do their own stunts – including, it seems, Patrick Macnee, who gets thrown about in the wrestling ring quite a bit. Because Venus is so apparently weak and naive, however, it’s difficult to feel anything other than anger with Steed when he effectively prostitutes her to Borb (without telling her). There’s no doubt that, however much danger he puts his partners into, Steed always manages to get them out just in the nick of time. Still, the hardened, manipulative edges of Steed’s character is more on display here than in almost any other episode.