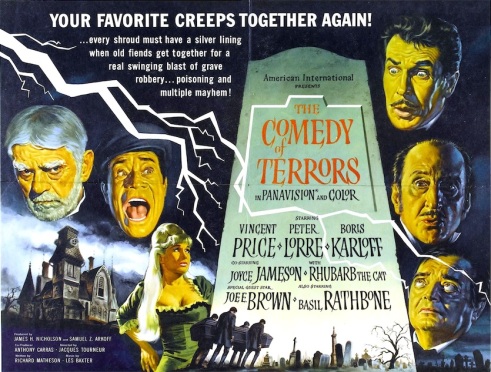 Do you need that repeated? No? Just read it a few more times.  Now inform me of how this movie can possibly go wrong.

The fact is that it can’t.  Price is Waldo Trumbull, an obnoxious and drunken undertaker on the verge of being cast into the street by his landlord John Black (Rathbone).  He has a crazy opera-singing wife he despises (Joyce Jameson), an incompetent assistant named Felix Gillie (Lorre) and a father-in-law who has seen better days (Karloff).  In an effort to buoy his failing business, Trumbull undertakes (HA!) to murder rich elderly men so that he can give them a funeral.

This is a Laurel and Hardy film with four of the finest horror movie actors to step onto a screen.  Price and Lorre bully, shove and tear into each other constantly, Karloff chews the scenery whole and Rathbone … Rathbone has to be seen to be believed.  The plot hinges on Trumbull’s idea to simply knock off his landlord, thus making some ready cash and getting rid of a man he hates into the bargain.  But Rathbone proves (hilariously) hard to kill, prompting the funniest funeral ever.

The Comedy Of Terrors could not have been performed with any other cast – each actor brings their own inimitable star personas to theirparts, and proves once and for all that they were all capable of playing comedy.  I knew that already about Price and Lorre, but Karloff! Now Karloff was a revelation, giving Rathbone one hell of a eulogy.  The comedy depends on an audience’s awareness of the roles the four men have played in the past – it’s one of the first and finest of the self-referential horror-comedies that Price would cash in on so brilliantly later in his career.

There are things that could be better about The Comedy Of Terrors.  A little less time dwelling on Price and Lorre breaking into houses and a little more time on the plot to kill Rathbone.  Less of Jameson warbling, more of Karloff wandering about looking befuddled.  Price is incredibly unlikable, yet you want him to get away with it just to keep everything moving.  The running jokes get a little wearing after the fourth or fifth repeat, and Price’s vicious hatred of his wife becomes off-putting – however obnoxious she is.  The film really picks up in the second half, once Rathbone has fully committed himself to spouting Macbeth at regular intervals and Karloff begins indulging in histrionics.

I don’t know what else to say about The Comedy Of Terrors, except that I enjoyed just about every minute of it.  Price and Lorre are a great comic team, their differing physicality working very much to their advantage.  Despite some plot holes big enough to fit a horse-drawn hearse, by the end of the film I was laughing so hard I did not care.