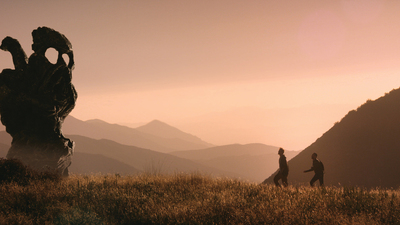 Actor/directors Justin Benson and Aaron Moorhead open their latest film The Endless with a quote from H.P. Lovecraft, setting the immediate tone for a movie that will take some of Lovecraft’s notions about time, reality, and the monstrous unknown, and attempt to bend them into new shapes.

The Endless begins with a day in the life of Aaron and Justin, two brothers who escaped from a UFO death cult ten years previously. Still having difficulty finding their way in the regular world, their lives are further upended with the arrival of a tape bearing an apparent suicide note from the cult. Aaron insists on returning to the mountain where it all began to see what has become of the cult and the people they once knew. There they find their old friends and begin to get involved in cult life again—much to Aaron’s excitement and Justin’s chagrin. But things are still a bit weird—no one in the cult appears to have aged a day in ten years, strange things are happening in the woods, and the forest deity that the cult worships may or may not be a metaphor.

Those metaphors, by the way, are what dooms The Endless to failure, relying on half-baked concepts that it believes are intellectually riveting. The Endless aspires to depth without ever quite earning it. Its story feels like a first draft in which the author has a number of good ideas but no idea how to make them pay off. As a result, it falls back on tropes that I have seen one too many times, mixed up with a few platitudes about being allowed to live your life to fullest, even to the point of fucking it up. There are themes here about control and about the comfortable notion of a higher power—an “unknown”—controlling everything. But if The Endless wants to be some sort of semi-spiritual fable about free will, it doesn’t have the intellectual capacity to follow through on it, instead slipping back into time-bending tropes that have been used to better effect in other films, and relying on the notion of a monstrous and god-like unknown to drive the narrative.

What exactly is going on in The Endless isn’t clear from the outset, and I’d rather not say too much about the twists that the film goes through to reveal itself. I will say, however, that it doesn’t quite manage to establish the rules of the world it creates, leaving the viewer to try and figure it out for themselves from a series of ultimately incoherent clues and random conversations. This wouldn’t be objectionable if there were any indication that the film itself understood its own rules without explicitly revealing them, but there is a fudging going on here that the filmmakers seem to take pains to conceal. Once the basic structure is revealed, I was reminded of quite a few other films that take a similar perspective as The Endless drops into some well-worn traps it would have been better to avoid. The cult angle abruptly vanishes in the third act as the film shifts focus, and immediacy of certain character choices take a backseat to attempting to elucidate—again, without success—the meaning of what we’ve been seeing.

All of this is a damned shame, because The Endless does indeed have a lot going for it, especially in the set-up and the cinematography. There are some brilliantly creepy moments—including a tug of war with the invisible deity—and the film manages to merge concepts from authors like Lovecraft and C.S. Lewis into its own wavering mythology. Benson and Moorhead are disarmingly charming actors, lending their characters off-beat humor even in the oddest of circumstances. The major question during the first half of the film is whether or not the cult is really a cult, and the cheerfulness and apparent good-nature of all the inhabitants conceals an underlying hostility that is creepy without being totally off-putting. The film could go either way, and for much of the first half manages to walk that line without telegraphing its eventual intent.

But The Endless just isn’t as smart as it thinks it is, and fails to fulfill any of its narrative promises. Benson and Moorhead are experienced directors by now, but they appear to have difficulty ending a film (an affliction that many directors currently share). Their ending is simplistic, and The Endless’s attempts to Say Something Important fall flat in its wake. While I hesitate to write the film off, given its evident desire to do something more with its genre-twisting, it was a disappointing end to what might have been a fascinating story. Lovecraft did it better, and that’s really saying something.

The Endless is currently showing at the Tribeca Film Festival.