Full disclosure time: I am not, nor have I ever been, a Trekkie.  It just was never in my genetic make-up to get really into Star Trek.  I always preferred Star Wars, and resisted valiantly any attempts from Trekkie friends to get me to admit that Klingon was a language.  But as a result, I never saw Star Trek II: The Wrath of Khan. And for that, I am truly sorry. 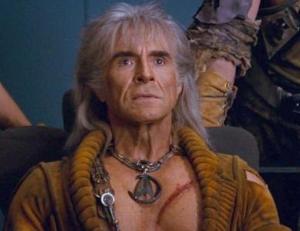 Most know the plot, but here it goes: James T. Kirk is not a Captain any more, but an Admiral, and apparently going through a mid-life crisis.  He winds up aboard the Enterprise, along with most of his original crew, during a training mission that goes spectacularly wrong.  Because one of Kirk’s old sins has come back to haunt him in the form of Ricardo Montalban as the fabulously bare-chested and feather-haired Khan, who was marooned on a planet many years before.  Khan’s got a chip on his shoulder about old Jim, what with the marooning and the death of his wife and all, and so intends to destroy Kirk no matter what it costs him.  This is all wrapped up in the Genesis project, a scientific endeavor to create life out of lifelessness and run by Kirk’s old flame. Khan wants Genesis, but more than that he wants to make Kirk suffer horribly.

So much, so good.  The Wrath of Khan is perhaps the most recognizable of the Star Trek films – from the introduction of Khan, Shatner’s famous scream and – spoiler! – the death of Spock.  But it’s a just a great film, even if you don’t know Star Trek.  Kirk’s crisis is an understandable one and well-played by Shatner.  He’s in turmoil, missing the energy of being a young man but fully cognizant of the mistakes he’s made and what it meant to his future.  The relationships between all the leads is touching and honest without being overplayed.  It’s a clever film, with clever plot turns, and a testament to why Star Trek has become so iconic.

Having already seen Star Trek Into Darkness, like everyone else I began comparing the original Khan plot arc with the new one.  While a number of scenes are strikingly similar, what struck me most about Wrath of Khan was how understated the emotions of the Starfleet crew really were.  In Star Trek Into Darkness, the emotions are all very surface: Bones, Uhura, Kirk, Khan and even Spock all succumb to tears at some point.  Khan’s driving force in that film is his crew – his love for them, and his willingness to harm anyone who stands between them.  In Wrath of Khan, the driving force is his … well, wrath.  He’s angry; all his love and passions are translated into an obsessive fury.  While that’s played upon in Star Trek Into Darkness – and played very well by Benedict Cumberbatch – Khan’s obsession feels more in line with Kirk’s, rather than the antithesis.  And the tears that accompany ever expression of emotion feel wasted in Star Trek Into Darkness.  By the time we really want to see the characters cry, they’ve done it so much that it loses power.

In Wrath of Khan, only one tear is shed and that by a Vulcan.  But while the characters don’t burst into tears, the audience does.  Spock’s death is heart-breaking because you can hear how badly Kirk wants to control his emotions.  Two understated performances  from Shatner and Nimoy make the scene.  It’s heartbreaking because it’s inevitable, and because the emotions are real but never extreme.  You know that these two friends love each other and you know it without either one of them shedding a single tear.

So at the end of the day, this non-Trekkie loved Wrath of Khan. It even made me seek out The Search for Spock, and seriously consider if I shouldn’t give Star Trek the show another chance.