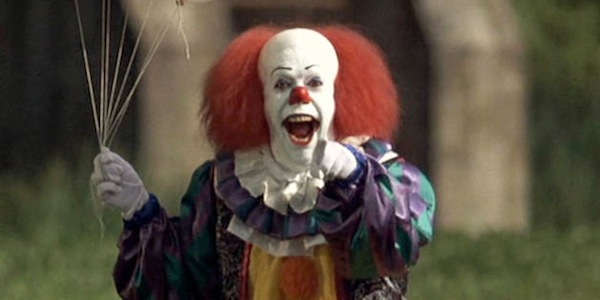 I will confess something: I’m not a fan of Stephen King. I’ve read a few of his novels and there’s always a point at which he becomes sadistic in the treatment of his characters. I had to finally abandon Salem’s Lot for just this reason, and Pet Sematary stands as one of my least favorite books. But somehow, I’ve always enjoyed the adaptations of King’s books far more than the books themselves.

The 1990 miniseries It is based on King’s 1000+ page novel of the same name. It tells the story of a group of kids in Derry, Maine who face a nameless evil in the form of the diabolical clown Pennywise (Tim Curry). Pennywise has been slowly picking off the kids of the town one by one, luring them down into the sewers with promises of balloons and cotton candy. The Losers Club – seven kids who face different kinds of bullying from the local toughs – band together to stop Pennywise once and for all.

Like the novel, the miniseries spans thirty years. The final member to join the club Mike (Tim Reid) is also the only one to stay in Derry, acting as the local librarian. He’s the one who calls them all back together when a series of killings reminds him of Pennywise. As each member of the group filters back to town, their stories are revealed.

It suffers somewhat from its overlong, episodic structure. Rather than going in chronological order, the constant flashbacks as each Loser remembers his or her past becomes a wearing device, bouncing the viewer back and forth between the past and present day. It also slightly confuses some of the plot elements that are deemed important in the second half of the miniseries, when the Losers finally get back together in Derry. They all claim to have limited memories of what happened, yet the flashbacks, told from the perspective of each character, are very clear.

It might have worked better as a shorter film, cutting down on some of the episodes and allowing the story of friendship and loss of innocence to develop over time. There are quite a lot of themes that are only cursorily touched on here – including what “It” is, exactly, and why it has chosen Derry – yet the miniseries still feels overlong. Nor is it always clear that It manifests itself as something that each child fears. Apparently Beverly is afraid of sinks backing up?

The first half of It is saved by the presence of Tim Curry, who makes one hell of a scary clown. Curry’s peculiar brand of indulgent, delicious evil is well-suited to Pennywise, a sadistic trickster as well as a manifestation of evil. Pennywise isn’t just content with eating children every thirty years – he wants to scare the bejeezus out of them first. As he torments the children and their adult selves alike, his presence becomes something to look forward to. It’s rather disappointing, in fact, when It’s true form is revealed…

It is a serviceable film that nonetheless would play better, with all its flaws, as a two hour movie and not a 3+ hour miniseries. A little whittling down of the story – or at least making it less episodic – would have gone a long way to making even this TV version higher quality. To that end, a new version of It is currently being produced as a two-part film, which is both interesting and a little worrying. I’m not sure that clowns need any more bad rap at the moment.