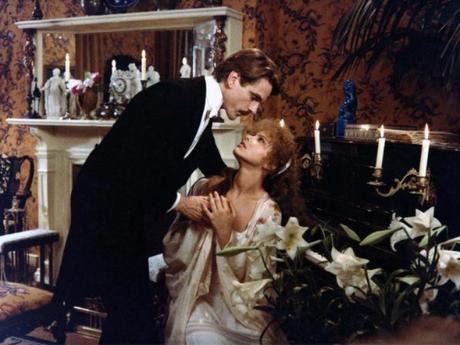 Whether it ultimately works as a film or not, props must be given to director Volker Schlondorff for even attempting an adaptation of a portion of Marcel Proust’s Swann’s Way, the first volume of the French author’s endless epic In Search of Lost Time. Schlondorff’s film specifically deals with the romance between aesthete Charles Swann and his mistress Odette de Crecy, the story of which only takes up about half of Proust’s first volume. Which is just as well – Swann in Love is the most plot-driven part of the book, with the most action and intense emotions. How to translate Proust’s languid sentences to the cinematic medium is another challenge, and one which Schlondorff but imperfectly captures.

Jeremy Irons is Charles Swann, an aesthete bachelor in fin-de-siecle France who spends his days going to elegant parties, hobnobbing with aristocrats, and pining for his mistress Odette (Ornella Muti). Odette is a source of intense suffering for Swann, who experiences bouts of jealousy over her relationships with everyone else (some justified, some not) to the degree that he follows her to parties and the opera, and even heads to brothels to inquire of her previous life. It’s not so much that Swann is horrified by Odette’s past – there’s no question that she has had a multitude of lovers, male and female – but rather wants to be certain what her past even was, so that he can understand it and, in some way, claim it as a part of himself. He refuses to take her assurances as fact, yet cannot find solid ground to cling to, pursuing an image rather than a woman. Swann wants to define Odette only in relation to himself, driving sudden wedges between them, then torturing himself with thoughts of what might have been.

Swann’s own social position further complicates his relationship with Odette. His drive to be accepted means that he can’t really marry her without jeopardizing his friendships with people like the Duchess of Guermantes (Fanny Ardant, underused). Swann is himself Jewish, as remarked by several characters at the start of the film, putting a further blot on his social escutcheon. Swann’s wobbly social position is the undercurrent that runs through the film, as he’s apparently rejected by Odette’s “lower” friends the Verdurins, while not quite of the proper social class to be more than a hanger-on of the Guermantes.

Jeremy Irons captures Swann’s haunted, ephemeral beauty and obsessive nature, as he pursues Odette with a condescension and a passion both maddening and erotic. Equally strong, but underused, is Alain Delon, applying his waning beauty to a curiously sympathetic performance as the Baron de Charlus, an aging dandy whose world-wise cynicism and pursuit of aesthetic pleasures conceals a basically decent nature. Odette, meanwhile, is a venal and occasionally annoying young woman and the film conjures little sympathy for her relationship with a nearly violently obsessive man, either in script or in Muti’s performance. So much time and energy is spent on focalizing through Swann that the basics of his relationship with Odette – and the essential unfairness with which he treats her – become obscured within his obsession.

Like its main character, Swann in Love is a deeply aesthetic film, in love with the precise rendering of fin-de-siecle France and the placement of the social classes within it. Also like its main character, finding the soul beneath the aestheticism can be difficult, and Schlondorff’s camera, on occasion, seems to avoid humanizing the characters for fear of tainting their superficial perfection. The occasional flights of cinematic fancy, like the use of voiceover to render Swann’s ever-changing desires about Odette, seem to be attempts to depict the ephemeral nature of time and memory that was such a large part of Proust’s project. But because the central story is told in a fairly straight-forward manner, these momentary departures fall flat.

Swann in Love is an interesting film, very pretty to look at but without any desire to bring out the soul of its characters. It is inadequate as an adaptation – as I think just about any attempt at faithfully adapting Proust would be – but fulfills a good bit of its promise as a piece of cinema, deeply visual and pleasurable in its images. Fascinating, superficial, and ephemeral, it does manage to capture something of a lost world, a time and a place and a set of people who will eventually fade into memories before they vanish altogether.