In the third and final Dr. Martin King episode Dead On Course, we take a sojourn out of England and head for Ireland. Steed is sent to the Emerald Isle to investigate a plane crash and the disappearance of some bank consignments that happened to be on board. He drags Dr. King along, presumably because Cathy Gale does not have a medical degree (although what I wouldn’t have given to see what Cathy made of this one).

The crux of the script involves a plane crashing apparently off-course, the last in a series of mysterious plane crashes. The multiple dead are taken to a nearby nunnery. There’s a survivor, though: a severely concussed air hostess who might know what’s been happening to the planes. Things are further complicated when Steed discovers that the co-pilot is not numbered among the dead. Bizarre goings on at the local pub, the local airfield, and the local nunnery are all wrapped up in a somewhat confusing script.

Dead On Course is one of the more complex episodes to come out of the second season. It doesn’t much matter what’s actually happening, of course: there are villains with Irish accents, nefarious shenanigans, and Steed flying a plane. It seems safe to presume that this episode is a leave-over from the hard-boiled, more dramatic first season of The Avengers, as it bears little resemblance to some of the weirder-themed episodes featuring Cathy Gale or Venus Smith. Although death tolls in this series are sometimes surprisingly high, this one brings us up close and personal with at least one murder, not to mention the aftermath of a massive air crash. Steed gets very violent with one villain which, while justified, is shocking to those who have only seen him as the bowler-hatted English gentleman.

There’s not a great deal to recommend about Dead On Course, unless you’re a completist (or a Steedophile like myself). It’s a middling little drama with little flair until the end. There is the enjoyable performance of Donal Donnelly as the apparently simple pub worker Vincent O’Brien, but beyond that you might as well skip it. Even nuns with guns cannot make this more than slightly interesting. Good-bye, Dr. King. You probably deserved better. 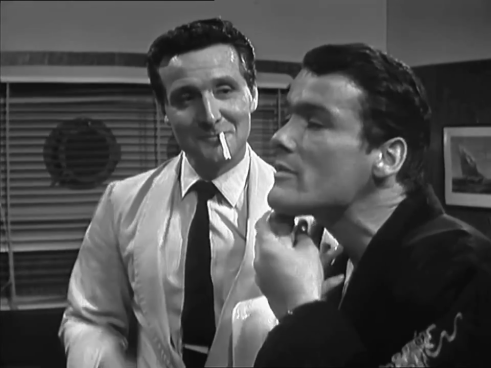 The Avengers is full of what-if production scenarios. What if Honor Blackman had remained on the show? What if Diana Rigg never left? What if Ian Hendry had not decided to move on after the first season? The latter is perhaps a question Avengers fans seldom ask, as all that remains of Hendry’s stint on the series are three episodes, one of them incomplete (and the bulk of the shooting scripts). But Hendry and Macnee were the original Avengers, and in fact Steed played second-fiddle to Hendry’s Dr. David Keel.

The question of Hendry comes up because of Mission to Montreal, and Hendry’s attempted replacement Dr. Martin King, played by Jon Rollason. The King episodes were scripted for Ian Hendry and underwent little alteration (unlike the Cathy Gale episodes, which obviously had to accommodate the fact that she was a female anthropologist). Maybe Hendry would have made better mileage out of Mission to Montreal,  but with Rollason having to hold the audience’s attention for a good twenty minutes of the episode, it’s rather rough going.

Dr. King travels via steamship to Montreal in attendance on a lovely actress who may or may not be involved with the death of her stand-in, and the smuggling of stolen microfilm plans. The first twenty minutes of the episode are occupied with King and Carla Berotti (early-season doppelgänger Patricia English) making eyes at each other. Carla already a husband, though, as we discover early on – he’s a crew member on the ship, and it seems that he’s the one who got her involved in these nefarious shenanigans. Steed pops up halfway through the episode posing as a steward (and making fun of Dr. King’s dressing gown).

Although there’s something to be said for the setting and intrigue in this episode, the dialogue is turgid, and the pacing hardly worth comment. Rollason has little charisma on his own; his flirtations with Carla are neither interesting nor particularly sexy. While I might be able to see Ian Hendry pulling this one off, it’s a disservice to Rollason to make him carry his first episode.

There are amusing moments, though. Steed and King have a friendly interplay that might have served them well had King’s character been given room to develop. A few sequences, including a party in Carla’s room and the murder of a drunk contain real suspense. By and large, though, this is one of The Avengers most boring episodes. Thank God for Cathy Gale.