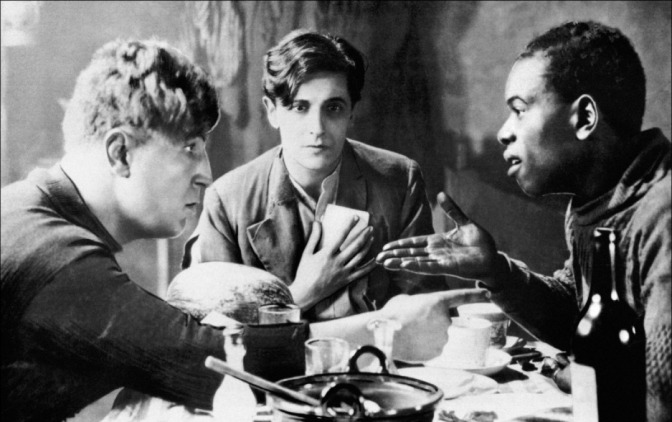 When we think of Hitchcock’s early work, we tend to focus on the thrillers, usually starting with The Lodger in 1927 and, skipping a number of films, onto movies like The Man Who Knew Too Much, The 39 Steps, and The Lady Vanishes. His other films from both the silent and sound eras generally get short shrift, representative, at best, of the building blocks of the Master’s career and little else. It’s rare for anyone to note the fact that Hitchcock made melodramas, adapted plays, comedies, and even a musical. And some of this inattention is because the films don’t easily fit into an auteurist model, but these films have floated around in bad public domain prints for years, their picture blurry, and sound (where there is sound) muddled. But thanks to FilmStruck and the Criterion Collection, we finally get a chance to see halfway decent prints of Hitchcock’s earliest available works, and discover that there was much more to the Master than his murderous masterpieces.

Downhill is only Hitchcock’s fifth credit as a director, and came out the same year as the far more famous The Lodger. It also stars Ivor Novello, here taking on the lead role as Roddy Berwick, a schoolboy who becomes entangled with Mabel (Annette Benson), a waitress at the school. Mabel is also having a fling with Roddy’s friend Tim Wakely (Robin Irvine), and arrives in the headmaster’s office and to accuse the wealthier Roddy of impregnating her. Roddy denies it but, knowing it’s Tim’s child, decides to take the blame. He’s promptly expelled from school and then from the home of his father Sir Thomas Berwick (Norman McKinnel), starting his “downhill” journey into poverty as he becomes an actor and later a gigolo.

On the surface, Downhill looks like a moral tale so beloved in the silent era, about avoiding fast women and loose morals. Certainly all of the hallmarks are there: we know that Mabel is a bad girl leading young men astray as she works several jobs, flirts with students, and wears far too much mascara. Roddy’s crime is not really his involvement with her, but his naiveté. He really is innocent and even honorable, at first—he refuses to expose Tim and get the latter kicked out of school. But Roddy ceases to be a victim as time goes on—after leaving home and becoming an actor to pay the bills, he comes into an inheritance from his godmother, which he promptly spends on marriage Julia (Isabel Jeans), who spends him into oblivion. His trajectory is more about his personal exploitation and naiveté than it is about any crimes he’s committed, but he’s far from innocent. He was involved with Mabel, even though he’s not the father of her child; he’s warned about Julia’s frivolity and affairs; he consistently turns to more disreputable ways of earning his money, although he never descends into crime. Roddy’s downward spiral is a version of feminine narrative, in which the girl goes from riches to rags, usually turning to prostitution. Roddy instead becomes an actor and then a gigolo, culminating in a nightmarish scene in a Parisian nightclub that should be seen as one of the finest in silent cinema.

Hitchcock’s style is very much in evidence here, especially the early influence of German Expressionism. Brief scenes, as when Roddy goes down into the Underground after being cast out from his father’s house, and again as his shadow casts across the stairs as he ascends to his apartment, recall images from Nosferatu and Metropolis, while the club scene owes a debt to The Last Laugh. There’s no doubt that this is a young filmmaker experimenting with what the camera and the frame can do, but there’s an assuredness to the images that reminds us that Hitchcock never used flourishes without a purpose. It’s all in service to the narrative, to telling a visual story through Roddy’s eyes. Most impressive is the use of POV shots, during a sequence in which Roddy sinks into delirium as he’s taken on board a ship. The camera stumbles down stairs, stares up at masts as the frame multiplies, and finally descends into hallucinogenic reveries as Roddy replays his experiences. The film largely lacks title cards, with large swathes of dialogue elided over in favor of information conveyed solely by the image. Novello’s performance likewise shows influence of Expressionism, as he casts his body against vaulted closet doors, or becomes slowly bowed as he sinks further into poverty. In such an otherwise dark narrative, it’s a pleasure to note that there’s a good bit of Hitchcockian humor on display, with visual jokes and sleight of hand that will become more developed over the course of his career.

But Downhill shouldn’t be viewed as an interesting footnote. It is deserves to be considered on its own merits, as a part of Hitchcock’s oeuvre that does not cleanly fit into the thriller model. This is a great director making a great film, not a fledgling director who will go on to great things. There’s genius here, and it belongs to Downhill.

Downhill is available to stream on FilmStruck