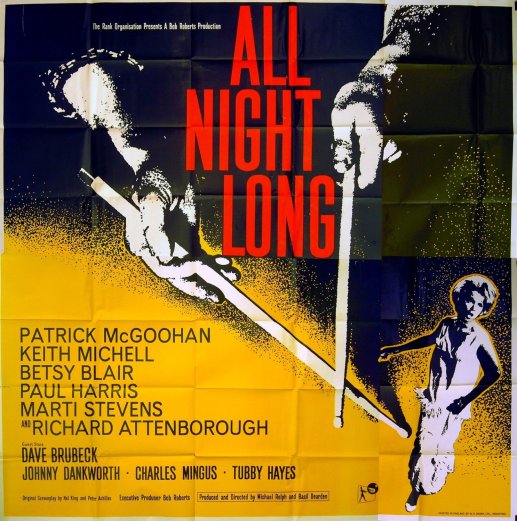 Shakespeare has been retold, re-adapted, modernized; he has been edited for length and subject, retold to fit high school love triangles, Miami street gangs, and even animated lions. Ubiquitous as Shakespeare is, it should come as no surprise that someone along the line decided to retell Othello as a (then) modern tale of love and race among drunk and disorderly jazz musicians in 1960s London.

Basil Dearden’s All Night Long takes the plot of Othello and adds some needed jazz scoring. Aurelius Rex (Paul Harris) is the leader of a major jazz ensemble that includes his passionate sax player Cass (Keith Mitchell) and brilliant drummer Johnny Cousins (Patrick McGoohan). Rex is married to Delia (Marti Stevens), a beautiful blonde chanteuse who quit her night job to be his wife. On the eve of their one-year wedding anniversary, music promoter Rod Hamilton (Richard Attenborough) throws the happy couple a big party, complete with fellow jazz musicians Dave Brubeck, Johnny Dankworth, and Keith Christie to keep the music and spirits flowing. Things are not well in paradise, however: Johnny Cousins wants a band of his own, with Delia at the head. To this end, he employs any nefarious means necessary to get Delia away from Rex and back in the spotlight.

There are two real stars in All Night Long, and the first is the music. The likes of Brubeck and Dankworth lend some serious musical talent to the proceedings, punctuating the backstage manipulations, petty jealousies, and passionate love affairs with piano solos and drum kicks. The non-musical lead actors do a credible job of miming their instruments, but give wide range to the real jazz performers to do what they do best. Even if the film was unsuccessful in other ways, the sheer virtuosity of the jazz would be enough to make me watch it all again.

The other star is Patrick McGoohan. His Johnny Cousins is the perfect Iago: a blend of malevolence and desperation, a pathetic sociopath incapable of loving anyone, including himself. Johnny makes his entrance with a slew of drum cases bearing his name, bruiting both his self-involvement and his desperation to be recognized as someone important. His manipulation of Delia, Rex, and just about everyone else at the party starts out as calculated and self-serving, but it soon becomes apparent that, like Iago, Johnny does what he does out of pure spite. McGoohan has never been one of my favorite actors, but his intensity is perfect for the part. (As, indeed, are his formidable drumming skills. It’s difficult to mime drumming chops, and as far as I could tell McGoohan was doing his own work).

One of the more interesting elements of All Night Long is the racial aspect – or rather, the lack thereof. Despite the setting of London in the early 1960s, the marriage of Rex and Delia does not seem to raise any eyebrows. Other musicians are critical of Rex for making his wife quit working (though he constantly reiterates that she made the choice herself), but no one remarks on the social difficulties of a marriage between a black man and a white woman. Johnny’s malevolence has no hint of racial motivation, as it does to some degree in Othello – gone are Iago’s racial epithets, replaced by Johnny’s painful inability to love. We should note that Dearden was also the man behind films like Sapphire (about a racially motivated murder in 1960s London) and Victim, both unflinching in their examination of British intolerance. Yet in All Night Long, there is much being said in no one saying anything.

All Night Long has its failings, however. The trope of marijuana causing people to behave violently and erratically was a recognizable one in the 1960s, but is pretty laughable in 2015. The jazz lingo employed by our (predominantly British) musicians falls harshly on contemporary ears, making some lines impossible to listen to without cracking a smile. Finally, there is the confusion of British actors playing Americans, with McGoohan especially having difficulty maintaining a clear-cut accent. While far from a deal-breaker, some elements of All Night Long have dated rather badly, making the film more a product of its period than a universal classic.

Basil Dearden is one of finest and least recognized directors coming out of Britain in the 1960s. Here he makes excellent use of an excellent cast, highlighting some of his favorite social issues without shining a spotlight too fully on them. Patrick McGoohan in particular gives a fascinating performance, as Johnny’s cruelty runs hand in hand with his pathetic psychology. Othello was never as swinging as this.