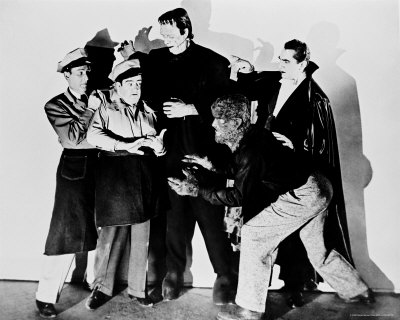 Abbott and Costello Meet Frankenstein is my favorite horror-comedy – yes, even before Ghostbusters.  It also scared the crap out of me when I was about seven.  My father decided to show it to me because it was the film that proved to him that monsters were something to laugh at.  And what effect did it have on me? Well, Dracula climbed out of his coffin and I ran screaming from the room.  This was further exacerbated by the fact that we lived in an old Victorian townhouse on 9 acres of woods that was regularly infested by bats.  My father spent the rest of the evening trying to convince me that Dracula wasn’t real and that he was not going to turn into a bat and suck my blood.

Abbott and Costello Meet Frankenstein still gives me chills, but that’s mostly a result of that childhood experience.  In the adult world, it’s simply an entertaining film, especially for those who enjoy the original Universal Monsters.  Because they’re all here! The Frankenstein Monster, Dracula, and the Wolf Man – the latter two played by the actors who originated them.  The plot revolves around the resurrection of Dracula (Bela Lugosi) who has plans to revive the Frankenstein Monster (Glenn Strange) with the help of Sandra (Lenore Aubert), a crazy doctor who eventually loses some blood to the Count.  The crux? Old Franky needs a new brain and he’ll find it in the head of Wilbur (Lou Costello) a dull-witted baggage clerk.  Opposing the gruesome ghouls is Lawrence Talbot (Lon Chaney Jr.) who keeps turning into a wolf – that full moon lasts an awfully long time.

The monsters play it fairly straight while Abbott and Costello ham it up around them – but they’re all game.  Lugosi in particular seems to be enjoying the chance to play his most iconic role and spout lines like “What we need today is young blood … and brains.”  I only wish that Karloff would have agreed to reprise his role as the Monster.

I think the reason this kind of freaked me out when I was a kid was the fact that the whole film turns on the notion that monsters really do exist:

Wilbur: But does Dracula know it?

The comedy is broad, the plot nonsensical, and the film is deliciously fun.  But honestly, it kept me believing in monsters.