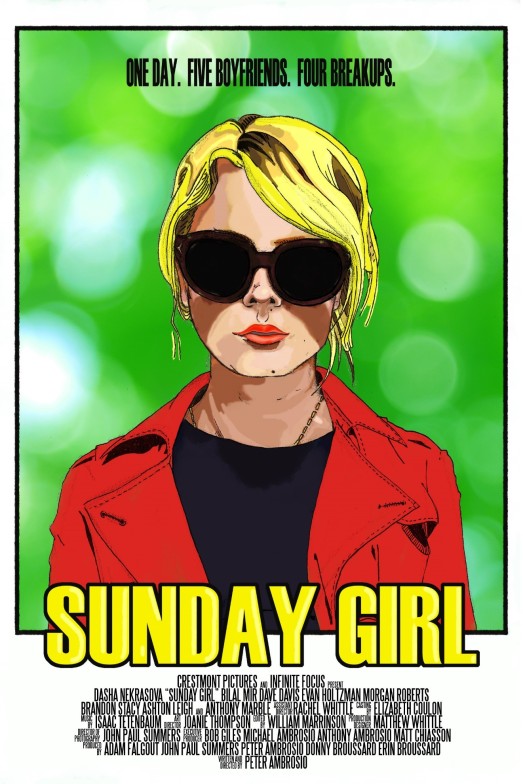 Sunday Girl opens with its lead character, Natasha (played with disarming charm by Dasha Nekrasova), casually snapping an image of an off-camera man with her iPhone, then heading down the street to her old-school Volkswagon Bug, which she pulls up a few feet to stop in front of suburban home. There, she breaks up with the first of what turns out to be four different boyfriends, all of whom have different reactions (and feelings) about their relationships with Natasha. Natasha, however, is doing her best to commit to a fifth guy, George (Brandon Stacy), with whom she’s had an on-again/off-again relationship for some months. The opening shot is actually Natasha doing her job – she’s a photographer working on a project involving images of people crying – and over the course of the Sunday (we assume), she begins to question the core of how she lives her life.

Sunday Girl could come off as an unbearably twee entry into mumblecore, complete with an idiosyncratic wardrobe, nostalgic callbacks, Wes Anderson-style shots, and a set of increasingly obnoxious, talky boyfriends with whom Natasha splits. But somehow the film works, due largely to the gradual revelations about Natasha’s character, her desires, and her attempts to do the right thing. At first, Natasha appears to be your typical cinematic representation of a detached Millennial, passing through life on her phone, halfheartedly engaging with the real people around her. But her increasing desperation and attempts to fix a problem that she created turns the film into more of a journey of the heart, as she tries to enforce her own sense of self-worth and self-control over relationships that she seems to have accidentally fallen into. The men themselves run the gamut of navel-gazing, self-serious poets, to corporate lawyers, but it’s less about whether they’re too good or not good enough for Natasha, and more about her need to detach herself from them in order to move on with her life.

The film’s anchor point is Dasha Nekrasova, a podcaster whose bonafides are increasingly in question (beyond Red Scare, a left-wing yet nihilist podcast, her major claim to fame is appearing on Last Week Tonight, and showing up in an episode of Mr. Robot); better, though, is that she’s an actress who does have some screen presence and is likely to gain more as time goes on. She’s a strong but uncomfortable presence in Sunday Girl, and focalizes the confusion of tone that the film, especially in its third act, falls into. This is certainly not a feminist march toward freedom from (stupid) men, but it’s also not explicitly anti-feminist. Natasha comes off as a confused but basically decent woman trying to figure out what she wants, and knowing pretty well what she doesn’t. She’s looking for a solution to the direction of her life in her relationships, but neither the film nor Nekrasova’s performance provides a sense that she’s able to be “fixed” by the right one. Rather, she’s stumbling through, attempting to do the right thing without really knowing how.

Writer/director Peter Ambrosio doesn’t attempt to do too much with his story, which is probably why Sunday Girl doesn’t come off as an attempt to transmogrify mumblecore. The point is the character and her trials, even if there are occasional flourishes with a fancy red coat or the ubiquitous presence of an adolescent girl whom Natasha cautions against cigarettes, ice cream, and falling in love. While the early parts of the film dwell too long on the men holding forth about their relationships with Natasha, the film picks up when she reveals her problem to her roommate, Kim (Ashton Leigh), who gives her some inept but well-meaning advice.

Sunday Girl’s final act unfortunately undoes some of the good will of its first two, constructing a semi-nihilist conclusion for Natasha without providing much solution to her conundrum – or even finding any satisfactory conclusion in the lack of a solution. But it’s a film that works fairly well until then, developing a thin narrative into something potentially profound. For a slight film that comes in at barely eighty minutes, Sunday Girl has some fine qualities that makes it more than a diverting indie exercise.