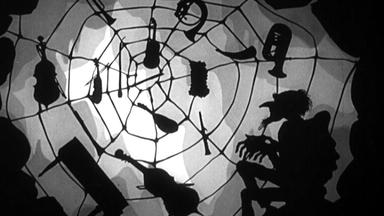 Most film buffs know Lotte Reiniger as the pioneer of silhouette animation and the creator of the first feature-length animated film The Adventures of Prince Achmed, a combination of One Thousand and One Nights stories that predated Walt Disney’s Snow White by over a decade. Reiniger was the creator of more than forty films using silhouette animation, a technique initially borrowed from the Chinese shadow puppet tradition that utilizes paper dolls to form silhouettes, then animated and photographed frame by frame. Reiniger is one of the frontrunners of stop-motion animation.

While Prince Achmed is certainly her most famous and ambitious work, Reiniger also made a number of shorter films, including The Stolen Heart, a 1933 short about a town populated by lovers of music who lose their instruments to an old demon. The thematics of the story involve the triumph of joyful music over evil, as the demon is eventually conquered not by anger, but by joy.

Films like The Stolen Heart make a passionate argument for Reiniger’s place in the pantheon of animation greats, a symbol of the power of female directors. There is no dialogue, and Reiniger’s storytelling depends on the combination of the visual and the use of music and song. The film comes off as an anti-fascist parable, reinforced by depiction of the demon as a gigantic old man, looming over the tiny village and robbing the people of their joy. But joy in itself is stronger than oppression and it is the action of the instruments themselves that liberates the people – the music echoes across the landscape, awakening the villagers from despair and eventually crushing the oppressive shadow. Reiniger’s silhouettes meld and transform, and give the impression of witnessing real life through a curtain, warmth and love radiating even as sorrow nearly cows the people.

Reiniger tends to come off as a footnote in animation history, partially because of her gender, and partially because silhouette animation is now largely a lost cinematic art. But it is hard  to watch The Stolen Heart and fail to be moved by it. Reiniger is an artist, a director of the highest caliber, and anyone who fails to seek out her work has done a disservice to themselves and to the history of cinema.