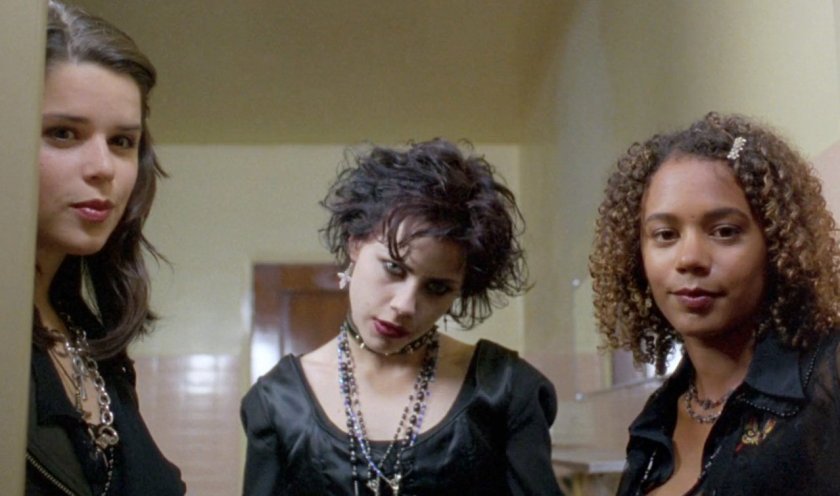 I was ten years old in 1996, which is the major reason I never experienced The Craft, the uber-nineties movie about a grunge coven in a Catholic school. And while the film has a, um, somewhat questionable moral, the first two acts more than make up for the ending’s lack of satisfaction by featuring loads of stylish mayhem as it posits the question: what happens when you give teenage girls occult powers?

Sarah (Robin Tunney) is the new girl at an L.A. Catholic school, where she becomes fast friends with Bonnie (Neve Campbell), Nancy (Fairuza Balk), and Rochelle (Rachel True), a group of oddball outcasts rumored to be witches. They recognize her power and court her friendship, believing her to be the fourth needed for their coven to truly amplify their powers. The rites are fun, and Sarah feels that she’s found real friendship within the coven as she discovers her nascent abilities as a witch. But, being teenage girls, the group begin to use their witchcraft to get petty revenge on those who have wronged them, trying to fix superficial problems or punish bad boyfriends and bullies. When Nancy gets drunk on power after they complete a black magic rite, the witches begin to turn on each other, becoming the very bullies that they were trying to escape.

The Craft is enjoyable as more than a slice of nineties nostalgia (though it has that in heavy doses) – it’s also about the complications of being a teenager, the seething anger, sexual confusion, and desire to break free of social constraints. The four leads play well off each other – their status as outcasts, the pain that they each suffer because they don’t quite fit the requirements of their society, makes them sympathetic even as things take a darker turn. Balk is the standout here, her goth-tinged sarcasm concealing a girl in a lot of pain, looking to control her environment however she can. Although her malevolence is ultimately destructive, there’s something satisfying about watching a derided young woman take epically violent revenge on a man who has wronged her and her friends. But the sympathy we feel is unfortunately undermined when the film takes a more moralistic turn in the final act, vilifying the witches and the manic, teenage energy they exude. Part of the point seems to be that teenage girls shouldn’t ever have any power – which might be true (I’ve been a teenage girl and having magical powers plus hormones would likely have been all kinds of nasty), but kind of undercuts the legitimate anger that these girls experience.

The Craft might have done well to include more complications around the performance of magic. The girls cobble together their own rites out of books and their underlying desires, but there are hints of other witches in the neighborhood who, for some reason, don’t think it worthwhile to maybe give these young women a guiding hand. Magic is treated as neither good nor bad – it takes its form based on the people who perform it. But because we only ever really see the four girls working their spells, this message is quickly lost.

Regardless, The Craft is a good, fairly light piece of fun, worth it just for the clothing, the music, and the four leads. It’s a cult classic for a reason.