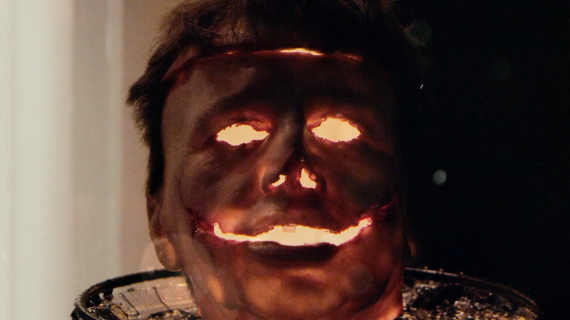 Playing in Final Girls’s Dying of Laughter shorts program is the comic A Tricky Treat, from director Patricia Chica, about one family’s worrying Halloween tradition. Less predictable than one might expect, this film takes a twist that I recall coming up in the anthology film Trick R’ Treat and gives it another little turn, resulting in a horror short that’s essentially a visual joke. It does remind the viewer that horror and comedy are closely aligned, and that we both laugh and cringe in equal measure at some of the more horrific things we come up with. While not exactly groundbreaking, this is a fun little film.

Prano Bailey-Bond’s Shortcut strikes a similar comedic note, this time as a horrific pun. While his girlfriend sleeps, a man drives home, finally opting to turn off the GPS and take a short cut. While it’s not clear what the film is leading up to, when the joke finally comes, it’s both hilarious and, yes, a little cringe-worthy. There’s a slight edge of revenge beneath the final shots, which the camera has set up for us without entirely telegraphing its intent. The lad-ish lead does increasingly unpleasant things as his girlfriend naps, making one feel that he sort of deserves his comeuppance. Sort of.

Both shorts highlight the close relationship between horror and comedy, and even find humor in suffering (as long as we know it’s not real). A Tricky Treat subverts expectations, while Shortcut plays on a verbal and visual pun. Both films take recognizable tropes and bend them, just slightly, altering perspective just enough to make us question our eyes and the assumptions we make. Both are clever and actually quite straightforward, if you pay close enough attention, but it’s to the directors’ credits that you might not know what’s going on until it actually pays off.

A Tricky Treat and Shortcut are currently playing at the Final Girls Berlin Film Festival.