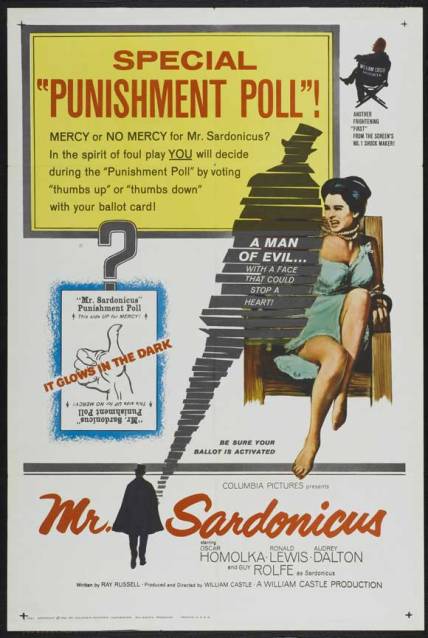 Director William Castle stands shoulder to dubious shoulder with Roger Corman as one of the premiere makers of American B-horror. While Corman lavished his audience with Technicolor-soaked melodrama punctuated by the occasional bout of Grand Guignol violence, Castle went the gimmick route, creating B-pictures that sought to expand the movie-going experience by involving the audience directly. The most justifiably famous of these was The Tingler, in which Castle famously wired up the theater seats with buzzers to scare the audience. Castle’s 1961 schlock-horror masterpiece Mr. Sardonicus is arguably the better film, happily reveling in its ghoulish carnival of the grotesque, with the director himself as Ringmaster.

Mr. Sardonicus is based on Ray Russell’s story of the same name (and Russell himself wrote the screenplay). It tells the deliciously malevolent story of Sir Robert Cargrave (Ronald Lewis), a doctor summoned to the nation of Gorslava by his former lover Maude (Audrey Dalton) to help her mysterious husband, the Baron Sardonicus (Guy Rolfe). Sardonicus is the “victim” of a terrible affliction: while robbing his father’s grave to obtain a winning lottery ticket, he’s so horrified by the appearance of the corpse that his face becomes frozen in a hideous grin. He enlists the help of Sir Robert, an expert in the healing of paralyzed limbs, to restore his face. But Sardonicus is also a sadist, torturing his servants, abusing his wife, and doing unspeakable things to young women in his off-hours, and Sir Robert has some serious reservations about assisting him.

Mr. Sardonicus is just an excellent B-grade picture, totally indulgent of the nastiness it’s presenting on-screen without excuse, or even particularly strident morality. The good guys are not too good – Lewis’s performance as Cargrave is somewhere between concerned and totally done with everything – and Sardonicus’s tragic backstory at least gives some meat to his character. Oskar Homolka is particularly notable as Krull, Sardonicus’s faithful servant who carries out some of his less palatable orders with a twisted glee.

Castle’s films are always heavy-handed, more like carnival rides than actual films, but Mr. Sardonicus moves beyond some of his more gimmicky work. The grotesqueries and “shock” moments are fully integrated into the main story, rather than acting as extraneous gimmicks. The most disgusting and enjoyable of these are the prosthetics used for Sardonicus’s smile, which are actually quite good for this period of film history. Russell’s story – already a masterwork of grotesque horror – translates brilliantly to the screen, and even manages to fill in some glaring plot-holes that might otherwise have remained open.

Superintending everything is Castle, who appears on-screen at the beginning and nearing the end of the film to remind the audience that we’re all here to watch terrible things happen to terrible people. His gimmick this time is giving the audience the option of voting on the ending – one in which Sardonicus is punished, and one in which he’s given mercy – by providing cards with a thumbs up or thumbs down on them. The transformation of the cinema to the site of participatory, gladiator-style theater has to be seen to be believed.

Mr. Sardonicus has a mean streak a mile wide, and asks you to participate in every wondrous moment of it. The more I watch of Castle’s films, the more I realize that he was one of cinema’s finest Ringmasters, fulfilling the audience’s penchant for murder and mayhem by getting them involved in the proceedings. There’s a weird pleasure to be derived from his films, something on the order of being escorted through a house of horrors by a guide who enjoys the wax figures and flying skeletons even more than his audience.

*Like this review? Please consider contributing to my Patreon.