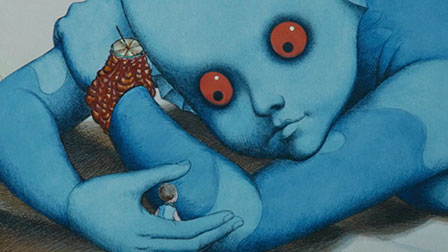 Until recently, we’ve tended to associate animated films with children, and treated animated films that deal with adult subjects as anomalies, or at best new discoveries. But animation has been around as long as cinema, and for much of its history it has been directed toward adult audiences as much as children. The French/Czech co-production Fantastic Planet, directed by Rene Laloux, is one of many animated films from the 1970s that deals with adult and oft-disturbing subject matter in a unique, complex way.

Fantastic Planet takes place on the planet Ygam, inhabited by a race of blue humanoids called Draags. Draags keep human beings, called Oms (in French, literally homme or man), as pets, putting them in collars, dressing them in little costumes, and playing with them. But Draags also view wild Oms as dangerous, vicious creatures that must be eradicated. The film centers around one Om named Terr, a pet of Tiwa, the daughter of a senior Draag leader. Through an error in his collar, Terr begins to learn Draag language, culture, and planet knowledge from a pair of headphones that project Tiwa’s school lessons directly into his brain. Finally sick of being treated like an animal, Terr escapes, fleeing into the wilderness with Tiwa’s headphones. He meets up with a band of wild Oms to whom he offers Draag knowledge, but incurs danger both from the frightened Oms and the increasingly malevolent Draags.

Fantastic Planet’s sci-fi plot is somewhat simplistic, enhanced by the surreal imagery that creates a strange, unique culture and experience. The film ostensibly was meant to reflect the Russian occupation of Czechoslovakia, but it has greater resonance than that, dealing with issues of dehumanization, genocide, and the complex philosophy that puts one people (or species) above another. The Oms are ignorant because their overlords have kept them ignorant, but the Draags also have no apparent awareness that their pets are anything more than dumb animals. Terr provides a bridge, imparting knowledge that proves to be a danger to himself, to the Oms, and to the Draags.

Fantastic Planet is more about image than about plot, the creation of a fascinating, bizarre world that is about cinematic experience creating meaning. While firmly set in its Cold War mentality, it nevertheless succeeds in being universal, in saying something about the way humanity treats that which it does not understand, about belief in superiority and the dangers that creates for all creatures, Draags and Oms alike.