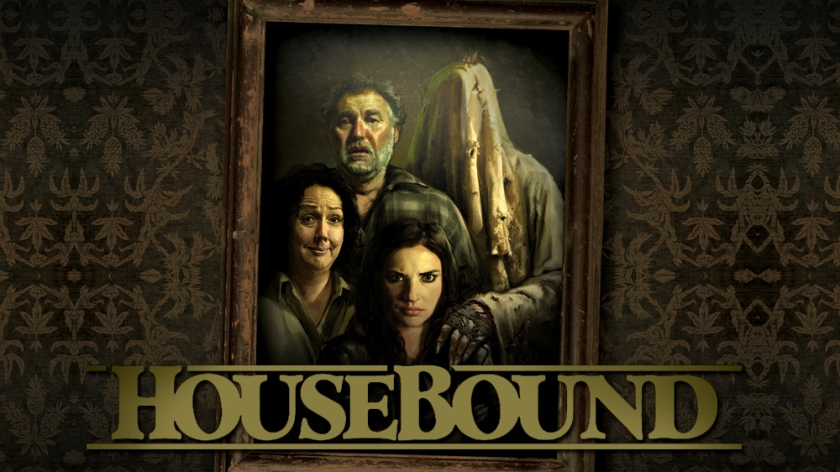 I’m not sure what’s in the water over there around New Zealand and Australia, but they are producing some unique horror films right now. The Australian feature The Babadook was notable for its female-centric narrative punctuated by some truly terrifying sequences; now another film about haunted women comes from the neighboring country of New Zealand in the form of Housebound.

Housebound focuses on Kylie (Morgana O’Reilly), a very inept felon captured while trying to rob an ATM. This is not her first offense, however, so the court sentences her to a fate worse than prison: house arrest at her mother (Rima Te Wiata) Miriam’s home. With a sensor fixed to her ankle so that she can’t leave the grounds without setting off an alarm, Kylie has to settle in to life with her mother and stepfather Graham (Ross Harper). At first Kylie is just sullen about the whole ordeal, but soon she learns that her mother persists in a long-standing belief that the house is haunted. When Kylie herself begins experiencing some rather paranormal phenomena, she enlists the help of Amos (Glen-Paul Waru), the security contractor who monitors her sensor and just so happens to be an amateur ghost hunter. As the pair begin to discover some sinister secrets about the house, Kylie becomes more convinced that it’s not all in her mind.

Housebound is that perfect blend of horror and comedy that makes films like Scream or Gremlins so enjoyable. The first half of the film is a legitimate haunted house story, complete with weird noises, looming figures, flashing lights, and strange events. The second half focuses more on Amos and Kylie’s attempts to discover the reason behind the haunting, leading them further afield – and Kylie into greater danger. But the whole film is underscored with wry humor: Kylie is a sarcastic, sullen young woman, her mother bright and bubbly and largely at peace with the fact that her house is plagued by a ghost. Most importantly, however, the plot all hangs together, right from the very beginning. The denouement is always a challenge for haunting films; there’s only so many way to resolve the story. Housebound actually gives a satisfying, believable conclusion to a very weird tale, bending genre tropes without ever breaking its own rules. The fact that this is all done by a first-time director and a relatively unknown cast just makes that much more surprising and exciting.

As an inveterate lover of haunted house movies, I can recommend Housebound with gusto. My one complaint is that there’s at least one twist that I did manage to predict, but that did nothing to damage my enjoyment of the film. It’s an entertaining ride from start to finish, rarely missing a beat, and bringing some proper scares along with it.