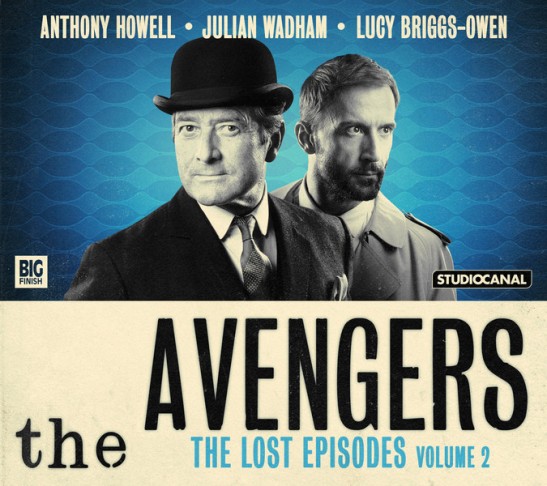 Despite my initial and rather violent reaction to the first volume of Big Finish’s Avengers adaptations The Lost Episodes, after some further convincing from fellow Avengers aficionados, I decided that it might be worth it to give the series a second chance. So I buckled down, swallowed my bile, and set out to listen to Volume 2 of the series, with the strong hope that I might something within it that would change my hatred to love. I cannot say that I found it, but at least my hatred is somewhat tempered and nuanced.

The Lost Episodes: Volume 2 begins with one of my favorite scripts Ashes to Roses. Steed (Julian Wadham) goes mostly solo on this one, supported in his endeavors by Dr. Keel’s assistant Carol (Lucy Briggs-Owen). Together they infiltrate a hair salon that’s home to murderers, arsonists, and interchangeable young women with interchangeable voices. Carol proves to be an able assistant – a sort of early-years combination of Venus Smith and Cathy Gale – going off on her own without Steed or Keel’s permission. There are some neat little exchanges and, despite the melodrama of the hair salon, it’s a generally diverting episode. Keel only makes an appearance to wag his finger at Steed and patronize Carol, but despite this, it’s Carol who gets to do the most, helping Steed catch the baddies and even disobeying his orders to keep out of it.

Unfortunately for the series as a whole, Julian Wadham manages to instill a generally charming character with his peculiar brand of self-involvement, downright smarminess, and upper-class stupidity. Steed becomes a caricature of an upper class twit with no underlying steel or charm to his personality. His “seduction” of Denise, a vapid young hairdresser in Ashes of Roses, is particularly off-putting in its combination of predatory masculinity and bad pick-up lines. While I suspect Patrick Macnee might have been able to give these lines a knowing lilt (dear God, I hope so), Wadham has such a tenuous grasp on his character that it comes off as an oilier version of James Bond (this should not be surprising, as Wadham is apparently under the impression that Steed was a progenitor to Bond). Wadham further appears to think that the character requires a total lack of variation in his line delivery, with every single sentence trailing off at the end like it lost its way. Why do we care what happens to this man? Why does anyone trust him? What’s more, who cares? It gets to be a hard slog when one half of the team is about as interesting as a plank of slippery wood.

I wish I could say that Anthony Howell’s Dr. Keel fares a bit better, but when he returns in Please Don’t Feed The Animals, we are treated to yet another one-dimensional character. Here we have Steed and Keel grappling with the leakage of information (a favorite plot in The Avengers early seasons) which has something to do with a strip club and a zoo. I lost interest about halfway through, as I was asked to imagine an adorable monkey/diabolical mastermind without, you know, actually being able to see or hear it. Keel here is inoffensive but uninteresting, stuck in a rather silly plot with even sillier complications. Steed succeeded in making me hate him more, so I simply tuned out most of what he said.

This episode does highlight the problems of a shift in medium, however. It’s not a script that lends itself to radio – there are many fights and scene changes and, surprisingly, hearing men grunting at each other for several minutes adds very little to the experience of an episode. The episode actually begins with a character death, but even then we mostly get some meaningless dialogue the ends with grunting and slapping. Try figuring out what’s going on. I dare you.

The scene shifts are another problem, particularly during one extended sequence that has Keel at the bar of a strip club, Steed in another room of the club, and a group of secondary characters in another room. While this is easy to do on a screen, it’s awfully hard to do on the radio. Distinguishing voices and locations becomes a serious mental exercise. I was confused for much of the sequence (which ends with more slapping and grunting) because the voices overlapped. Plot points were unfortunately lost in this process, though the plot itself was so predictable and dull it didn’t much matter.

It’s actually amazing how very little matters in these episodes. I’m passing over The Radioactive Man because it’s not even an Avengers episode, but a rather trite and unbelievable melodrama.

Like Please Don’t Feed The Animals, Dance with Death suffers from a surfeit of scene changes and fight sequences that, on the radio, fail to come to much more than confused grunts and short, snippy sentences from interchangeable characters who vanish after speaking one line. The entire first act is taken up with Keel saying things like “Hello. How are you?” and other characters responding with, “Just fine, thanks.” Hardly scintillating dialogue.

It’s a thankless job, really, for Dance with Death takes place in a dance academy and there’s really no way to do dancing in an audio drama. Nor is it a particularly strong script to begin with: a young woman thinks someone is trying to kill her, Steed and Keel try to figure out who it is. That’s pretty much it. The script isn’t helped by a really laughable set of secondary characters, all of whom manage to be both interchangeable and caricaturish.

Meanwhile, Julian Wadham wins this time for not being the most annoying voice. Anthony Howell is right there with him: they both whisper half their dialogue, no matter what the subject, and fail to give any inflection to their conversations. The script has no pop, and they certainly don’t give it any. Even Steed’s flirtation with his dance instructress falls curiously flat. Who let them whisper their lines like they’re a big secret that not even the audience can be let in on? Is this what Big Finish does on a regular basis, or is this series just a spectacular example of failure?

In total honesty, I want to like this series. It seems to be the only opportunity we will ever have to experience the first season of The Avengers, and at the very least it should be a historical curiosity to understand where the show came from. But this is painful. It’s more than painful, actually, it’s offensive, because it is so blithe and self-congratulatory. Congratulations, Big Finish, you’ve made me hate not only my favorite character, but my favorite show. That’s a pretty big achievement.

One thought on “The Avengers Lost Episodes, Volume 2”