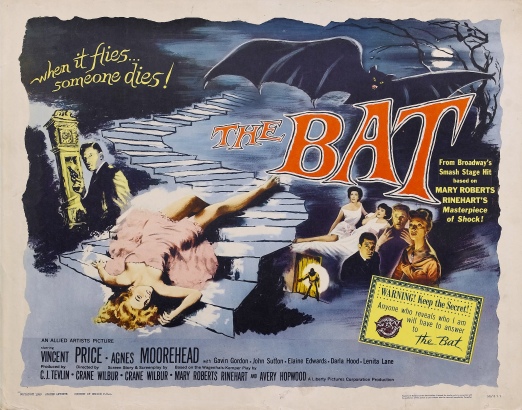 B-grade mystery movies of the 1950s had a cache all their own. Very often the ghostly or apparently supernatural killer was in it for the money and nothing else, which for me usually takes some of the suspense out of the investigation. I was pleasantly surprised by The Bat, however, which has all the earmarks of a generic thriller and manages to be a bit different. The Bat is a surprisingly clever, funny little film, stocked with some excellent character actors led by Agnes Moorehead and Vincent Price.

The Bat opens with mystery writer Cornelia Van Gorder (Moorehead) leasing an old mansion while the owner is away on an extended hunting trip. The mansion and the small town have a sinister history, though: they were the site of several murders the year before by a character known only as The Bat, a serial killer who preys on women by ripping their throats out with steel claws. Cornelia is thrilled at first, but things start getting ugly when The Bat apparently breaks into her house and releases a rabid bat into her bedroom. These events are wound up in the disappearance of a million dollars in securities from the vault of the local bank. The culprit is the bank’s owner and proprietor of the very mansion where Cornelia and her maid now live; but the bank owner was murdered by his friend Dr. Malcolm Wells (Vincent Price) before revealing the location of the securities (I’d say this was a spoiler, but it happens within the first ten minutes of the film’s run time). 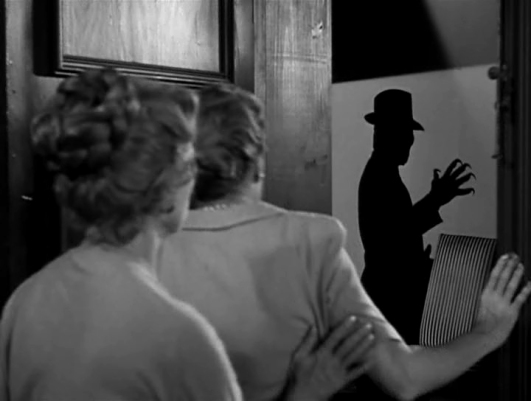 There are actually more than a few twists and turns running through a film that appears quite simple on the face of it. The mansion is treated as an “old dark house,” but some of the suspense is punctured by Cornelia and her maid’s no-nonsense attitude to tales of ghosts and killers. AgnesMoorehead is at the top of her game here, playing Cornelia as an acerbic Agatha Christie who delights in the mayhem going on around her, and is more than capable of taking on several Bats at once.The film makes excellent use of its female characters, each of whom proves to be much tougher than the men that surround them. Female friendship is powerful and long-lasting, while male friendship proves remarkably false. It’s really up to the women to solve the mystery, save the town, and find the loot; the men are too busy killing each other off.

Moorehead has a brilliant counterpart in Vincent Price; their scenes together pop as each tries to out-creep the other. Price’s sinister persona is pitch perfect as always, giving the simplest lines dark and terrible meaning that he obviously delights in. If there’s a flaw in him, it’s that he’s so obviously sinister from the beginning, as the audience is privy to the original murder of the bank owner.

The Bat isn’t a brilliant thriller by any means; one wonders what a Hitchcock or a Lang might have made out of the same cast and script. But it is a diverting little film, enjoyable from beginning to end. Don’t assume that you know the solution as you go into it – it has quite a number of hidden corridors.