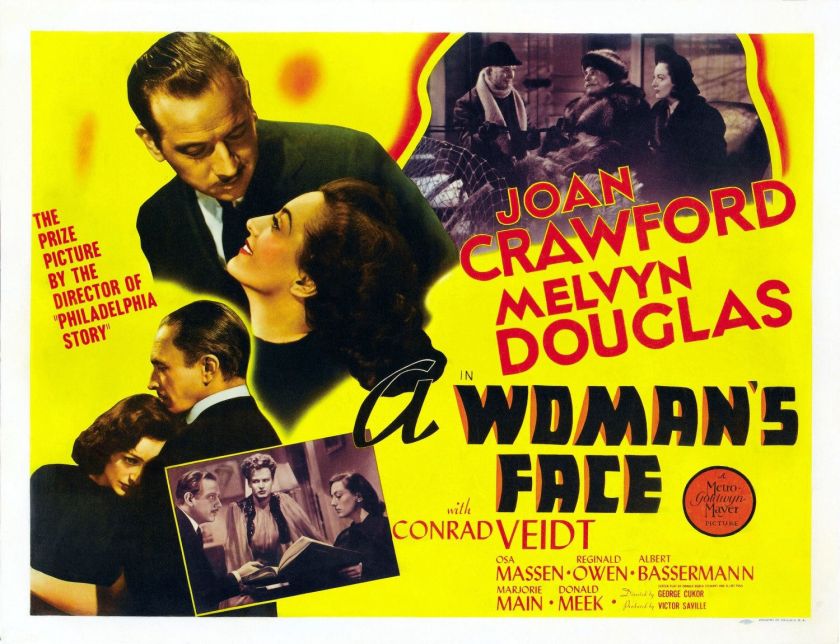 Over the course of a long career, George Cukor made any number of excellent films. While he delved into melodrama (and made some great pre-Code films like The Animal Kingdom), he was primarily known as a director of light drama and even lighter comedy like Dinner at Eight and The Philadelphia Story. A Woman’s Face is an anomaly in Cukor’s career: a noir-ish thriller with undercurrents of psycho-sexual tension, mental trauma, and physical abuse.

The film begins with witnesses coming forward at the murder trial of Anna Holm (Joan Crawford). As each character tells their version of the story, the film develops a strikingly serious and personal narrative. Following a childhood trauma that left the side of her face horribly scarred, Anna becomes a blackmailer and the leader of a criminal ring. She meets Torsten Barring (Conrad Veidt), the first man to look at her with no horror and no pity, seeing a woman as outwardly and inwardly corrupt as himself. After falling in love with him and becoming his partner in crime, Anna comes across a doctor (Melvyn Douglas) who believes that he can repair the damage done to her face. Her physical transformation begins to transform Anna’s psychology and she finds herself torn between her desire for a normal life, and her continued attraction to the criminal world.

While the film largely follows a linear narrative, despite the numerous narrators, it cannily avoids revealing too much at a time. Who it was that Anna actually killed – there are at least two candidates for murder as the film proceeds – and whether she is guilty of the crime plays second fiddle to the development of Anna’s psychological state. Her scar covers several symbolic layers: at first an apparent indication of evil, then a tragic example of violated innocence, and finally a physical manifestation of the world’s cruelty. Its removal does not really change the person that Anna is, but the way that the world treats her, as she finds the tenderness and acceptance she always craved. Yet one wonders if the scar was used more as a guard against emotional understanding and involvement, an excuse for evil rather than the cause of evil in itself. 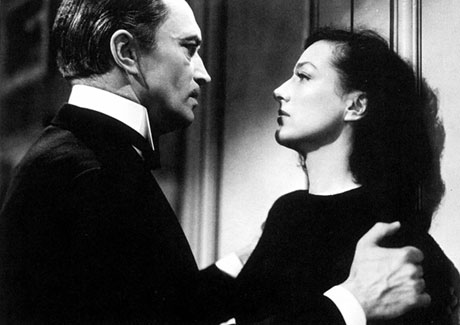 The cast of A Woman’s Face are a combination of 1940s character actors and stars. I’ve never been a big fan of Joan Crawford, but she plays Anna with a mixture of pathos and defiance that made me side with her even when she was doing awful things. Her anger at the world is understandable, as is her underlying desperation to simply be loved. She has a perfect counterpart in Conrad Veidt as Torsten Barring, a man for whom cruelty and sadism is an expression of love. Veidt is as terribly fascinating as a sleek jungle cat, slinking across the screen and offering one hell of an argument for the dark side. Set against him, physically and morally, is Melvyn Douglas, as earnest and likable a lead actor as you can come by. The three form a moral triangle with Anna at the apex; it’s anyone’s guess which side she’ll finally belong to.

There are missteps in A Woman’s Face, however. Several comic moments feel out of place, as though Cukor was trying to inject some lightness into a very serious script. The film is occasionally predictable – I could tell you the ending halfway through, though not necessarily the exact form it would take. Cukor seems a trifle uncertain how to handle the subject matter – the most intense example of chiaroscuro taking place during an extended conversation between Barring and Anna, as the former finally expresses his nascent madness and fascist tendencies. Barring’s implied fascism might not surprise (this is 1941, after all), but it does rather puncture some of the intense psychological sparring that the film took such pains to set up. It smacks of an attempt to bring current historical concerns into the film, but comes off feeling a bit clumsy and a little too pat.

Mild flaws aside, A Woman’s Face is a fascinating film, by turns surprising and curiously satisfying. I left the film with a sense of having seen something unique, something unexpected from a Hollywood of 1941. There are some films that have you saying that they don’t make ’em like this anymore. A Woman’s Face had me wishing that they made more of ’em.