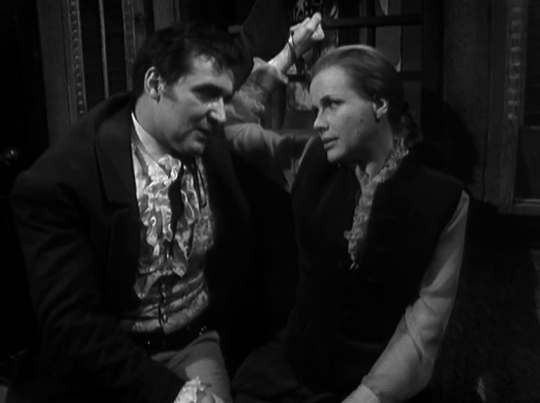 Dressed to Kill is The Avengers meet Agatha Christie, with some very mixed results. The plot revolves around a train trip on New Year’s Eve, with numerous guests, one of whom is a nefarious villain. The episode begins with Steed explaining to Cathy that World War III very nearly broke out the night before, when all the country’s early warning stations received word of a nuclear attack. The alarm proved false, but the government needs to know how and why the signal was sent. To solve the mystery, Steed joins a New Year’s fancy dress party on board a train. The guests share one thing in common: they all have options on plots of land in Cornwall, coincidentally close to the only early warning station that did not receive the false signal. When the train is diverted to an abandoned station and the guests begin dying off, Steed has to grapple with suspicions against him while trying to ferret out the killer.

Dressed to Kill has much to recommend it. The majority of the episode is occupied with the train journey and the guests at the party, all of whom do a credible job at appearing villainous and innocent in equal measure. The plot itself is sinister and the cinematography atmospheric and among the best The Avengers ever accomplished, with hardly a misstep in sight. Things pick up even more when stowaway Cathy pops up on the scene, providing one very entertaining scene as our heroes try to pick a pair of handcuffs.

Dressed to Kill has its problems, though. It is difficult to imagine a more annoying set of secondary characters, such that it’s almost a relief when they begin dying off. Among the worst are William Cavendish (Leonard Rossiter), dressed as Robin Hood, who makes it a point to be loud, venal, and insulting to everyone; and Jane/”Pussy Cat” (Anneke Wills), an insipid model character there to give the writers an excuse to make bad pussy and dumb blonde jokes. Her character in particular reinforces the fact that while The Avengers might have been very ahead of the times in female representation, it could still do sexism with the best of them.

The plot of Dressed to Kill likewise has a number of holes if considered for too long, with a denouement that feels both speedy and bit too pat. I could think of at least two other solutions to the mystery that would have been far more interesting, but alas, it was not to be. What is more, some of the early sequences on the train have so much dialogue going on at once – not to mention ambient noise – that it’s virtually impossible to catch what individual characters are saying, or if it’s even important.

Dressed to Kill rests very squarely on Macnee’s shoulders, and luckily he’s more than happy to oblige, playing his “gentleman of leisure” character to the hilt and evidently enjoying sporting a cowboy hat and six-shooter (In fact, Macnee played a few cowboys in his short Hollywood career). When Blackman reappears dressed as a Highwaywoman, events pick up and the episode saves itself.

Dressed to Kill would later be remade as the vastly inferior The Superlative Seven in Season 5. The original, for all its difficulties, is the better episode and remains one of the best examples of what The Avengers could do with limited budget and only three cameras.

One thought on “The Avengers: Dressed To Kill”