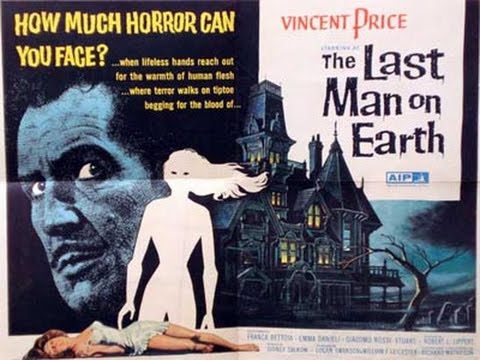 If humanity were to suddenly be subject to an airborne disease that turns its victims into the walking dead, who do you think would be the last man standing? No, not those idiots on The Walking Dead. Only one man could possibly survive the zombie/vampire apocalypse, and look good doing it too: Vincent Price.

Based on the Richard Matheson novel I Am Legend, The Last Man on Earth stars our Mr. Price as Dr. Robert Morgan, a biologist who has spent three years as the only man on Earth apparently not infected by a horrific airborne plague that claimed his wife, daughter, and best friend. The film takes us through Morgan’s typical day as he awakes, hangs garlic over his doorway, and heads out into the abandoned city with a bag of wooden stakes to find and destroy more of the vampiric creatures that were once the human population. He has to return before the sun goes down, though, for the vampires come banging on his door, threatening to kill him. He spends some time trying to get into radio contact with other living beings, but all to no avail. It appears that he truly is the only man left alive.

The Last Man on Earth reportedly inspired George Romero to make Night of the Living Dead, so all you Zombie-philes should get down on your knees and praise this weird little movie. This is a zombie movie before there were zombie movies, but the vampiric creatures share much in common with Romero’s later conception of the walking dead. Half brain-dead and only really powerful in numbers, the vampires seem to lack basic organization, banging on Morgan’s door and shouting threats without being able to organize themselves well enough to actually break into his house. Morgan’s contempt for the people that were once his friends is pathetic. In a flashback sequence, we learn of the origins of the plague, and of the slow decay of surrounding civilization as more people fall victim. When Morgan wanders the deserted city in search of vampires, the film provides an effective sense of the desolation and loneliness of streets without people and stores left empty. There is something horribly realistic in the first 3/4s of this tale of worldwide pandemic, the terror and mistrust perhaps all too real in this day and age.

Price gives one of his most affecting performances, at once sympathetic and slightly sinister as he struggles with his day-to-day existence, forced to burn the mutilated bodies of the vampires. He’s the only character on screen for most of the film’s runtime. Despite the somewhat hokey voiceover that was far too common in films of this period, Price’s performance elevates the film (as his performances so often did) – his elation at spotting a dog running loose in the streets is heartbreaking, for here he sees at last some hope of companionship in his long, lonely existence. Morgan is a monster and a hero in the same breath, and his suffering plays out over the contortions of Price’s remarkably expressive face.

The weakness of The Last Man on Earth lies in its denouement, which I won’t spoil for the reader. A relatively effective set-up is punctured in the final act, leading to a curiously unsatisfying conclusion. While miles ahead of its successor I Am Legend, starring Will Smith, The Last Man on Earth does not quite make good on its narrative promises.

Yet for all that, there is much to like about this odd little film. Price here embraces the melancholic suffering so prevalent in many of his best performances. He has taken the world’s cares on his shoulders, and become a monster in the process. Nothing could be so heart-breaking.