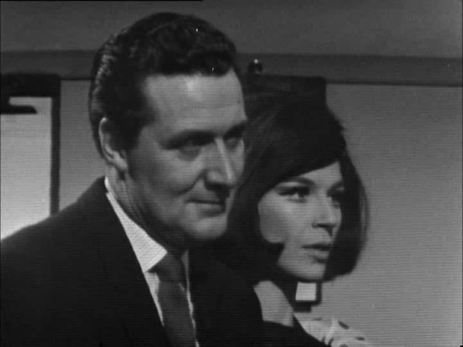 The Charmers bears the distinction of being one of a handful of Season 2 and 3 episodes to be remade – with mixed results – in the Emma Peel era. In this case, it’s a toss-up as to which version of the story is more successful, for there were several very fundamental changes made when The Charmers became The Correct Way to Kill.

In this iteration, Steed and Cathy have their domestic bliss invaded when Martin (John Barcroft), a Soviet agent, bursts in at Steed’s door waving a gun and accusing the British agent of killing a Soviet operative. Steed denies knowledge of the death, claiming that the Ministry thought that the “opposition” were doing a bit of housecleaning. It soon becomes clear that both sides are innocent of the murder, which means that a third party has been attempting to drive a rift between them. Steed goes to see Keller (Warren Mitchell, in his pre-Brodny manifestation), his “opposite number” on the other side, to propose a brief truce until they can get to the bottom of the killings. Keller suggests that they make a gesture of good faith: he will send an agent to assist Steed, and Steed will offer up a partner for Martin. So it is that Cathy, much to her chagrin, winds up as Martin’s partner, while Steed receives the services of “Agent” Kim Lawrence (Fenella Fielding). Unfortunately, Kim is actually an actress who thinks that Steed is a “Method” writer at work on a spy novel.

The convolutions of plot aside, this one is played for comedy, from Cathy’s fury at being “sold” to the other side, to Kim and Steed’s humorous misunderstandings as she talks about her life on the stage and he thinks she’s talking about her life as an agent. There are some very funny scenes in a shop as Steed insists on a tie for a “Totterers” Club, and some equally funny repartee between Cathy and Martin, who has quite a crush on the female agent. Unfortunately, the episode begins to fragment just a bit nearing the end, as the limitations of staging an elaborate fight scene on live television begin to tell. Splitting up our team for a large portion of the runtime also means that we don’t get much Steed/Cathy banter, but that might be forgivable in light of the very enjoyable opening scenes.

The Charmers is an episode that bears repeat viewings, if just to catch some of the fast dialogue between Kim (who becomes less annoying as time goes on) and a very confused Steed. While I give a slight edge to some of the changes made in The Correct Way to Kill, The Charmers is still very…charming.