While this is the subject of some debate, it is my conviction that Alfred Hitchcock made only one “proper” horror film over the course of his long career. Psycho has often been cited as the first “slasher” film, but I don’t think it’s insane to argue that Hitchcock’s 1963 film The Birds wins the award for inarguable horror.

Tippi Hedren is Melanie Daniels, an apparently frivolous young ingenue who meets and flirts with Mitch Brenner (Rod Taylor) in a San Francisco bird shop. Annoyed by Mitch’s teasing flirtation, Melanie purchases a set of lovebirds and heads to Mitch’s country home in Bodega Bay, to deliver the birds to his little sister Cathy (Veronica Cartwright) for her birthday. There she meets the schoolteacher Annie Hayward (Suzanne Pleshette), and Mitch’s mother Lydia (Jessica Tandy), both major feminine forces in Mitch’s life.  The whole thing is really just an elaborate gag intended to pay Mitch back for his teasing, but things begin to get scary when Melanie is attacked by a seagull. It’s the harbinger of things to come, as the local birds begin attacking and killing humans. The inhabitants of Bodega Bay are eventually forced to hole up in their homes, securing themselves against the constant and apparently purposeless onslaught of avian forces.

Hitchcock spends the first half hour of The Birds establishing the characters, their relationships, and the tensions already underlying Melanie’s interaction with the Brenner family. Mitch’s mother in particular seems to suspect and dislike Melanie, but in an extended conversation with Annie, Melanie learns that it is not as cut and dry as, say, a grasping and jealous woman (words that immediately call to mind Psycho, of three years before). The tensions are more complex, and in some ways more realistic, than that. When the bird attacks do begin, the viewer senses some tenuous and wholly inexplicable connection between the motiveless violence, and the animosities between our human characters. How to define this becomes the question, and the film poses no easy answers.

Much of The Birds is about human reaction to purposeless violence. While certain things are established about the attacks – they come in waves, they stop for long intervals, they appear to be concerted attacks by large numbers of animals – there is no apparent purpose behind them. The birds have simply “gone mad,” but it is a universal madness affecting all of them – except for the two lovebirds in a cage. The violence is overwhelming and disturbing, but it is the mad tension, the waiting for something to happen, that truly gives the film its energy. As one ornithologist explains, if birds of a feather truly do flock together, there’s nothing human beings can do to stop them.

For a film made in 1963, the special effects in The Birds hold up rather well. Hitchcock’s camera never lingers for too long on a single animal, making it easier to combine real trained birds with puppets, animation, and even back projection to form a largely seamless horror story. I wish the same could be said for the performances. Although Tippi Hedren’s performance is affecting, she has an aloofness and distance that after awhile becomes grating and makes it difficult for the viewer to sympathize. The same must be said for Rod Taylor’s rather self-satisfied lawyer, who has as much sex appeal as a store mannequin. The strong secondary characters, however, make up for the moments when the leads drag down the dialogue – and Jessica Tandy’s multi-faceted job as Lydia Brenner is a study in restrained acting. 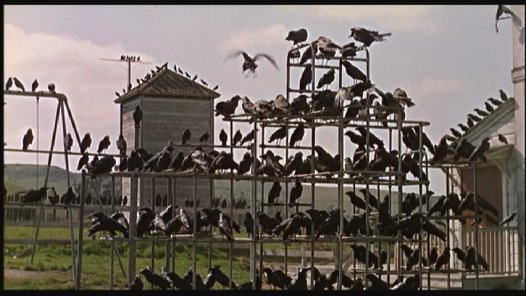 But the real stars here are the birds, and they’re really the ones we came to see. This is more than a “nature gone mad” story, so popular in the 1950s and 60s in the aftermath of World War II and the rise of the Atomic Age. The birds are not really mad, it seems. They know exactly what they’re doing, and that, more than anything human, is terrifying.