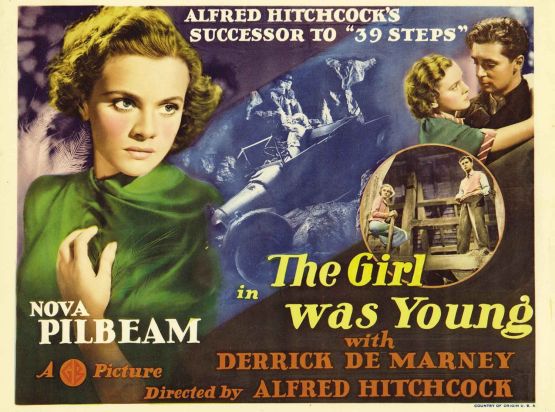 Alfred Hitchcock made some great and not-so-great films in his long career as the Master of Suspense. We often focus on his acclaimed “masterpieces” of suspense cinema: Vertigo, North by Northwest, Psycho, Rear Window – these are the films that many viewers think of when they think of Hitchcock. But Hitchcock was a director in his native Britain long before he came to America, and the films he made during that period sometimes exceed his later works in both humor and suspense.While some film lovers will know The Lady Vanishes, The Man Who Knew Too Much, and The 39 Steps, titles like Rich and Strange, Murder!, and Young and Innocent are routinely ignored. Some of this must have to do with the prevalence of public domain prints, which are often murky and imperfect reproductions of films that deserve much better. But Hitchcock’s British films contain not just the seeds of the style and themes that would come to fruition in his later American career; they are enjoyable, even brilliant works of cinema in their own right.

Young and Innocent opens with a stylized murder that we instantly recognize as Hitchcock. After an argument with her husband Guy (George Curzon), actress Christine’s (Pamela Carme) body is washed up on the beach below her home. She’s discovered by Robert Tisdall (Derrick De Marney), who runs off to get help only to be spotted by two young women. When the police arrive they claim that he was running away, and Robert is arrested for Christine’s murder. In the legal farce that follows, the police discover that not only did Robert know the dead woman, but he was also left a hefty sum of money in her will. What’s more, the dead woman was strangled with the belt of a raincoat that Robert claims he has lost. Realizing that he’ll get no justice without that coat. Robert  escapes from the courthouse just before his case is brought up, hiding out in the car of Erica Burgoyne (Nova Pilbeam), the Chief Constable’s (Percy Marmont) daughter. They begin a cross country chase to find Robert’s raincoat and prove that it was not his belt that strangled Christine. 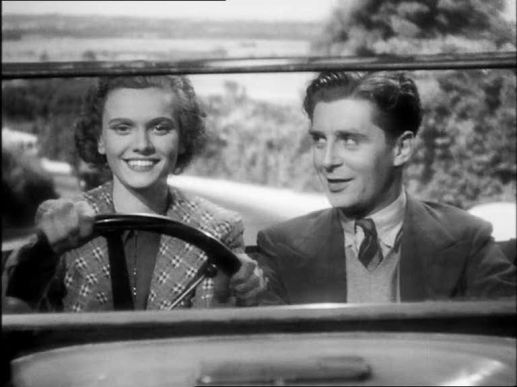 Young and Innocent is the “wrong man” narrative that Hitchcock made a central theme almost from the very beginning of his career. His best known silent film The Lodger operates on the same principles of a falsely accused man who must prove his innocence to both the police and to the girl he loves. The plot brings into relief issues of the justice system –  often shown as ineffective at best – and the vagaries of human nature, as the hero finds help (and hindrance) in some of the oddest place. In the case of Young and Innocent, the audience has no doubt about the veracity of Robert’s story. Without being shown the murder itself, we are given enough information within the first few minutes of the film to determine that Robert had nothing to do with it; it was Christine’s husband Guy, the man with the nasty eye-twitch, that killed her. The crux of the plot then trades on Robert convincing Erica that he’s been falsely accused. It is her story, really, as she comes to maturity via her experience, and her growing conviction that Robert could not have committed the crime.

Erica is on the cusp of womanhood, but she still presides over her father’s table, playing both good daughter and mother to her four brothers. Robert represents adulthood, a mature love, and an implicit threat to the family’s status quo. Erica’s faith in him saves him, just as his gentleness with her hints at an adult world she has never quite touched. Pilbeam and De Marney are excellent together, the latter playing the wry and dashing Hitchcock hero to perfection. Pilbeam looks and acts every bit her age (she was also the young daughter in The Man Who Knew Too Much),  yet manages also to fulfill some of the requirements of a strong Hitchcock heroine. She’s not a pushover and she’s not a victim. The youth of the two leads lends a lightness that might have been missing from older, more experienced actors – there is a sense of play in their friendship and then burgeoning romance, and an atmosphere of fun permeates their scenes together. 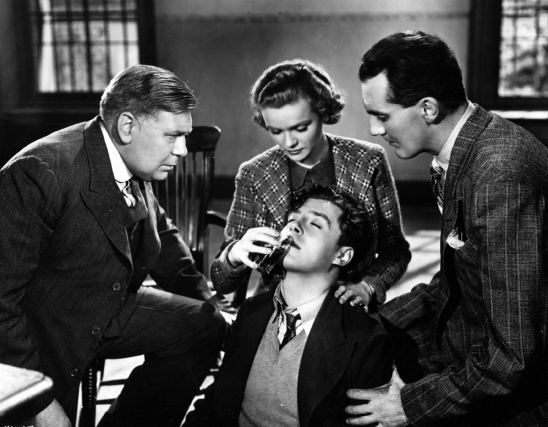 The comedy of Young and Innocent is its most endearing feature. The film contains an extended sequence making fun of the local police (and Scotland Yard), as Robert easily escapes from their clutches after a scene with his venal, incompetent lawyer, resulting in a madcap chase through the English countryside. An element of slapstick runs through the film: police officers are forced to ride in the back of a wagon “with the other pigs,” a child’s party interrupts Robert and Erica’s escape, and Erica causes a slapstick fight at a local truck stop as they try to locate Robert’s missing raincoat. Hitchcock had an innate sensibility and love for British society of all classes, and Young and Innocent is full of British character types, each both endearing and grotesque in their own ways. The most enjoyable of these is Old Will (Edward Rigby), who provides a crucial clue to the identity of the murderer and Robert’s salvation. He’s an endearing character who makes the film even more pleasurable to watch.

This is a Hitchcock movie, though, and Hitchcock movie means at least one feat of camerawork that we might not expect. There are any number of excellently shot and framed scenes throughout Young and Innocent, but the most obvious and influential “Hitchcockian” moment must be the crane shot nearing the end of the film. It begins in a hotel lobby, swoops slowly over a group of dancing couples in a ballroom, down over their heads and to the band playing at the front, coming to rest finally on the twitching eyes of the drummer, whom we know from the start is the real killer. The entire sequence is a single shot, but you almost miss the brilliance of the camerawork until after the fact. If all Young and Innocent had to recommend it was that single shot, it would be enough.

Young and Innocent is less solid than The 39 Steps or The Lady Vanishes, and only hints at some of the greatness that will come along in Hitchcock’s later masterpieces. But it is a light, joyful film, entertaining without being challenging, and with enough depth of plot and characterization that you come away feeling both lightened and intrigued by the outcome. It is a comedic film, but with an undercurrent that acknowledges the seriousness of its subject. Young and Innocent is a work of light, even in the midst of darkness. As Robert says: “I can laugh, because I know I’m innocent.”