When we discuss the pantheon of great Hitchcock films, we very rarely mention his 1940 war comedy-thriller Foreign Correspondent. There’s good reason for that: in comparison with the rest of Hitchcock’s oeuvre, Foreign Correspondent occupies a lesser category and could be blocked in with such films as Stage Fright, Saboteur, and Dial M For Murder. But even the worst of Hitchcock’s films have something to be said for them, and Foreign Correspondent is a far cry from being the worst. It is neither a great film nor a bad one, neither wholly successful nor a round failure. It has just enough hidden in its depths to make it intriguing, without ever quite making it great.

Foreign Correspondent features Joel McCrea as the titular correspondent Johnny Jones, who in the first few scenes changes his name to Huntley Haverstock and becomes the foreign correspondent for the New York Globe. Jones’s editor Mr. Powers (Harry Davenport) send our hero to Europe to drum up some “real news” about the European situation. Once in London, Jones encounters Mr. Van Meer (Albert Bassermann, who earned an Academy Award nomination for his role), a Dutch diplomat who has been trying to keep the peace in Europe. When Van Meer disappears during a luncheon thrown by Fisher (Herbert Marshall), the head of a united peace organization, Jones becomes embroiled in European politics and the machinations of a shadowy group bent on advancing the European war machine and obtaining vital secret information. Things are further complicated with Jones’s burgeoning romance with Fisher’s daughter Carol (Laraine Day) and the timely appearance of fellow newspaperman Scott ffolliett (George Sanders).

The first twenty minutes of Foreign Correspondent play like a wartime screwball comedy, beginning with the re-christening of Jones as Haverstock because his editor doesn’t like his name. Jones encounters Van Meer in a taxi on the way to the luncheon (the film’s MacGuffin, actually), but the political issues are promptly superseded by the adorable love/hate relationship that quickly develops between Jones and Carol. In fact, for much of the film’s opening act we see very little of that so-called Hitchcockian touch, with scenes that might have been shot by Howard Hawks or Preston Sturges. It’s a perfectly entertaining opening, but we’re all waiting for something important to happen. 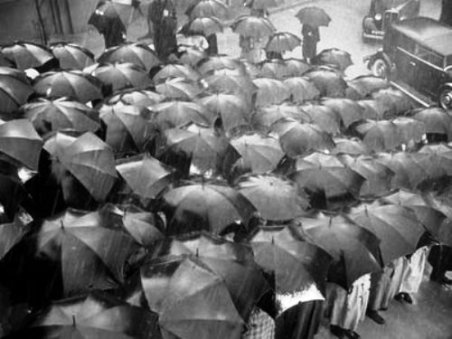 The important event turns out to be the apparent assassination of Van Meer on the steps of a conference building in Holland. The scene has that Hitchcockian feeling, as a beautiful crane shot over a sea of umbrellas establishes an immediate sense of foreboding. That same sea of umbrellas impedes Jones’s pursuit of the assassins through the streets, as bullets fly and at least one innocent bystander loses his life. Jones eventually springs into a car that contains Carol and Scott ffolliett (that’s two small f’s), and a chase through the Dutch countryside ensues. The rightly praised sequence involving a windmill and the uncovering of at least part of the villains’ scheme finally convinces the audience that, yes, we are watching a Hitchcock film. It’s a tense series of events, punctuated by humor from both Sanders and McCrea, and the well-known “Hitchcockian Blot” of a windmill turning against the wind.

From there, the film moves along at a strong pace, mixing the screwball romance with some recognizable “Hitchcockian” set pieces, each grander and more tension-filled than the last. Foreign Correspondent actually has more in common with Hitchcock’s British work than it does with his more famous American movies. The slow-burning screwball opening recalls The Lady Vanishes, while moments of humor provided by British and American character actors highlight moments of tension. Jones is an All-American hero lost in the morass of European politics that he either cannot or does not want to understand – a bit of a change from the stolid British types of Richard Hannay in The 39 Steps.

The cast of Foreign Correspondent is an excellent one. McCrea and Sanders set each other off perfectly, a meeting of nationalities attitudes that never veer into caricature. McCrea is a forthright hero with a good heart and a rather narrow vision of politics (his very American “let’s have a showdown” is repeated enough times for it to be taken ironically). But McCrea is a good enough actor to play the part of Jones with a lightness that never becomes silly, and a concern for humanity that supersedes his more naive aspects. His passion for Carol is genuine, as is his desire to tell the truth about what’s happening in Europe, if he can ever figure it out. Meanwhile, Sanders as Scott ffolliett is the unsung hero of the picture, occupying centre-stage for much of the latter part of the film after the director has apparently grown tired with his young lovers. ffolliett is one of Sanders’s most sympathetic and complex roles; yet another proof that Sanders was a very good actor when he put his mind to it.

Herbert Marshall occupies the difficult role of Fisher with a dash of charm and earnestness that we might not expect, his smoothness both charming and suspect from the start. Albert Bassermann’s Van Meer is the philosophical center of the film, a diplomat desperate to keep the peace and recognizing all too well that he shall fail. Laraine Day might come off as a touch too earnest and forgiving, and she has none of the strength of character we usually see in the best Hitchcock heroines, but she’s far from a poor actress and her character, while undemanding, provides a consistent lightness in the midst of the dark that permeates the second half of the film. The all-too-brief appearance of Edmund Gwenn, playing against type as a vile assassin, provides one of the film’s greatest sequences.

If Foreign Correspondent does not come off, it’s largely due to a confusion of plot and tone. While Hitchcock regularly blended light comedy with thriller, Foreign Correspondent fails to follow through on some of its promise. The film has several climaxes, and what’s at stake for Jones et al. is not always clear, as though the situation in Europe became more important as the film was being made. The immediacy of the propaganda aspect means that the film becomes heavy-handed with its message, and Jones and Carol become too representative of the earnest young couple trying to survive in a world gone mad.  Several speeches evidently inserted for propagandist effect appear a bit overwrought to modern eyes.

That being said, there are so many wonderful and truly spectacular cinematic moments in this film, it’s a shame that the whole does not perfectly hang together. The scenes at the windmill and at the peace conference I’ve already mentioned; there is also a tense sequence atop a cathedral that perfectly demonstrates Hitchcock’s ability to generate audience suspense. The final sequence aboard an airliner makes for one of Hitchcock’s most visceral, intense moments, but I won’t spoil the surprise.

Foreign Correspondent was made in 1940 and released at the beginning of the Battle of Britain. As such, it is indeed a masterpiece of propaganda – such a masterpiece, in fact, that it received praise from Joseph Goebbels, who remarked that it “will make a certain impression upon the broad masses of the people in enemy countries.” The film ends with a call to America, to realize just what is going on in Europe and to take steps to stop the “lights from going out” all over the world. It has a immediacy to it only present in the best films of the period, a sense that the outcome is uncertain and that war, for America as well as for Europe, is imminent.