Femininity and sexuality figure into the film in a similar complicated manner.  Dana (Sigourney Weaver) essentially plays the ‘straight man’ to the three Ghostbusters, particularly Peter.  Again taking the Marx Brothers comparison, she is Margaret Dumont or Thelma Todd.  Peter pursues her, erotically, flirtatiously and even in a somewhat predatory manner.  He maintains control of sexuality and the male/female binary until the evil spirit Zuul possesses her.  Her possession transforms her first into a libidinous and sexual character, then into a demon dog.  When Peter arrives at her apartment, he is confronted with not the somewhat reticent woman who has resisted his slightly sarcastic and lascivious advances, but a full-blown sexual creature, complete with make-up and wind-blown hair.  His reaction is discomfort, if not downright terror.  Still, the relationship is not as simplistic as it first appears.  What disturbs Peter is not only Dana’s suddenly intense sexuality; it is also that her sexuality is uncharacteristic of her.  It does not necessarily represent a danger to him, but a danger to her.

Dana: I want you inside me.

Peter: OK.  No, I can’t.  It sounds like you’ve got at least two people in there already.  Might be a little crowded.  C’mon, why don’t you just quit trying to upset and disturb Dr. Venkman and just relax?

Unwilling to take advantage of the situation and actually sleep with her, he rejects her advances and asks to ‘speak to Dana.’  Peter, who makes sexual advances to almost any female throughout the film, is at a loss and disturbed when met with a manifestation of feminine libido.  Simultaneously, however, he acts in the kindest, most moral way possible.  He declines to take advantage of her, recognizing that the woman clinging to him is not Dana at all, but a spirit inhabiting her body.  He finds recourse to jokes, as he does throughout the film, but the scene takes on a new level of discomfort and nervous energy.  Far from the playful tone of sexual innuendo that has been exchanged between them from the beginning, Dana now makes almost violent sexual advances towards him.  Peter, for all his talk, is not a sexual predator.  His reaction is to try to get help and locate the ‘real’ Dana within the false one.  Their relationship will return to a masculine/feminine dialectic in the end, but I would argue that in this case Peter succeeds in recognizing the ‘real’ Peter that would not take advantage of a possessed woman.  His sexuality, despite his lasciviousness, does not extend to actually engaging in illicit or dangerous sexual acts.  He can only make jokes.

Sexuality continues to be a central concern of the film.  The Ghostbusters are associated with a strictly masculine paradigm, represented in the plethora of phallic symbols and innuendo.  The guns they use to capture ghosts, the ever-present PKE meter that Egon likes playing with, and lightly comic jokes about Twinkies and ‘crossing the streams’ punctuate moments of sexual humor throughout the film.  At the same time, Ray and Egon are fairly clueless about women—Ray has one sexual fantasy about a ghost, and Egon cannot seem to recognize it when their secretary Janine (Annie Potts) flirts with him.  Peter, as the only Ghostbuster who has any real heterosexual relationship, nonetheless becomes terrified at the first sight of a truly sexualized woman.  In all of this, however, the film manifests an awareness of the tropes it plays with. 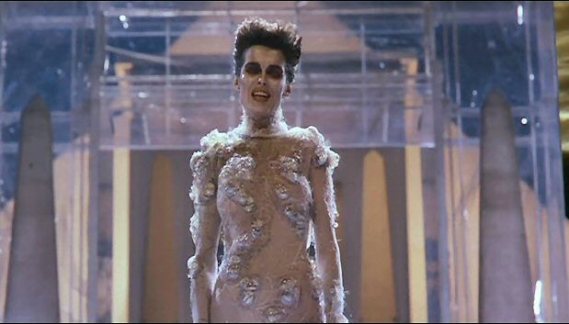 The apocalyptic narrative of the film comes into play through the realm of sexuality.  Gozer, the one who will bring about the apocalypse, can only be summoned through the sexual union of the Gatekeeper and the Keymaster.  The Gatekeeper in this case is a woman, the Keymaster a male, calling attention to the sexual puns inherent in those titles.  The Keymaster controls the phallic; the Gatekeeper controls the feminine.  This references the familiar euphemism for female genitalia as a ‘gate’ that needs a phallic male ‘key’ to unlock it.  Films such as The Devil’s Advocate (Warner Bros., 1997) and Rosemary’s Baby (Paramount, 1968) found their apocalyptic ideology within the necessary joining of masculine and feminine, resulting in the end of the world or the coming of the Anti-Christ.  Ghostbusters subverts these recognizable tropes of the apocalyptic by making them comic.  Even before the appearance of Mr. Stay-Puft, the apocalypse is something to laugh at.  The coming together of the hypersexual Dana as Zuul and Louis Tully (Rick Moranis), the nebbish accountant, as Vinz the Keymaster is a humorous image.  Dana stands head and shoulders above Louis; she literally sweeps him off his feet.  Their embrace is extremely stylized; as they kiss the wind blows, the music swells and the camera swirls around them.  The shot has a self-conscious camp aesthetic, although it avoids total parody.  What in other films is a terrifying, erotic moment becomes a piece of comedy.

Although Winston and Ray engage in the most serious elucidation of the coming apocalypse in their brief scene, the full explanation for what has happened in Dana’s apartment is given by the most intensely intellectual figure in the film:

Egon: It’s not the girl, Peter, it’s the building…The architect’s name was Evo Shandor; I found it in Tobin’s Spirit Guide…After the first World War, Shandor decided that society was too sick to survive.  And he wasn’t alone; he had close to a thousand followers when he died.  They conducted rituals up on the roof.  Bizarre rituals, intended to bring about the end of the world, and now it looks like it may actually happen!

Peter (singing): So be good, for goodness sake! Somebody’s coming…

The scene occurs in a holding cell after the Ghostbusters have been arrested.  Surrounded by prisoners, Egon gives a speech about the sickness of society and the ritualistic desire to bring about the end of the world.  Despite the seriousness of his speech, he keeps a steady smile on his face as he speaks.  The smile, the apparent enjoyment he has out of explaining the coming apocalypse, elucidates the strange festivity, the comedy of death.  The world is going to end; Egon smiles and Peter sings.  When they appear in the Mayor’s office, they again perform a comic apocalypse:

Ray: Real wrath of God type of stuff.  Fire and brimstone coming down from the skies.  Rivers and seas boiling!

Winston: The dead rising from the grave!

Coupled with the Biblical imagery are the comical aspects of ‘dogs and cats living together.’  While the apocalypse does not seem a completely banal occurrence in this scenario, the comedy of the situation, the gallows humor of laughing at the end of the world, permeates the entire scene.  The subversion of the usual somber tone of apocalyptic films and imagery transforms the apocalypse itself into a farce, something not to be taken seriously.

The final sequence of the marshmallow apocalypse brings together the manifestations of the repressed, libidinal impulses, and the dialogues of phallicism and gender into a final festival moment of comic destruction.  Supported finally by the establishment (including the Army, the Police, the Fire Department and the Mayor’s office), the four working class figures arrive to stop the end of the world.  The crowd that stands to greet them and cheer them on is a multicultural, multi-ethnic and multi-classed crowd, come together in festival to watch the Ghostbusters save the world.  Gozer manifests itself initially as a woman, played by supermodel Slavitza Jovan, a deliberately sexualized figure who threatens to destroy the Ghostbusters.  Recovering from her initial attack, the Ghostbusters return to (comical) phallic symbolism:

Peter: Got your stick?

The deliberate phallicism of the dialogue again relates the ‘wands’ of the Ghostbusters proton packs to not terribly subtle phallic imagery.  They attack Gozer, but fail to conquer her.  Instead, she demands that they name the ‘form of the Destructor,’ making the choice about what it is that will destroy them.  Here the sexualized figure, un-subdued by phallic masculinity, turns to a chosen apocalyptic image; only the chosen image is a marshmallow man.

Mr. Stay-Puft is the final and most potent manifestation of the repressed libidinal psyche, actually coming from the mind of one of the Ghostbusters.  Ray justifies his choice by saying that he tried to think of something that ‘could never destroy us.’  The apocalypse, then, is going to be wrought not by a sexualized supermodel, or a prehistoric demon dog, but a walking wad of puffed sugar.  The apocalypse thus manifests itself as an empty figure of fun, a sugary concoction that stomps around midtown Manhattan.  The ironic nature of the apocalypse becomes humorous and painful:

The festivity of the apocalyptic scenario in Ghostbusters acts as a manifestation of painful irony: the world is about to end, but how ironic that it will end in a rain of marshmallow.  Mr. Stay-Puft is also a corporate logo, a symbol of consumerism, and therefore a post-modern construction within the cinematic milieu.  Ray does not think of just any harmless character, but a harmless corporate character.  The film proposes destruction based around a literally rampaging consumer product.

The Ghostbusters defeat Mr. Stay-Puft by doing what has already been stated as dangerous—they cross the streams from their proton packs, apparently reversing the polarity of Gozer’s door and destroying Mr. Stay-Puft.  If we carry through the phallic symbolism already related, the Ghostbusters comically and sexually unite, establishing a homoerotic masculine paradigm that ends with the destruction of first the sexualized Gozer (who is nonetheless also asexual—she need not be male or female), and the freeing of Louis and Dana back into ‘normal’ sexuality.  Mr. Stay-Puft erupts in a rain of marshmallow, covering everyone below.  There is no denying the apparently orgasmic and masturbatory imagery this scene involves, as the four Ghostbusters combine their phallic instruments, resulting in an explosion of white foam that covers them all from head to foot.  Emerging from death, the Ghostbusters establish a new, highly masculine paradigm that nonetheless allows for comic rebirth.  The city and the world are saved through an orgasmic explosion of male sexuality.

This is the ultimate transformative moment of comedy, as the bringer of death appears in a comic form, and death itself explodes in an abject bodily function.  The ending of the world is satirized through Mr. Stay-Puft.  The film satirizes the union of sex, death and destruction through the establishment of a figurative male union and a New York covered in sugar/semen.  Although the images and thematics of Ghostbusters are exceptionally serious, taking on the end of the world, the problems of normative sexual relationships and the eruption of the chaos world in the form of enjoyable but damaging libidinal excess, the comedy of the film subverts the tropes from within, by acknowledging their terror, but also their humor.  In the end, Mr. Stay-Puft explodes and the Ghostbusters save the day, destructors themselves from within the system.  The marshmallow apocalypse is averted, but we are all still covered in sugar.

Spitznagel, Eric.  ‘Interview with Harold Ramis’ in The Believer, March 2006.

Tudor, Andrew.  ‘Why Horror? The Peculiar Pleasures of a Popular Genre’ in Horror,

Wood, Robin.  ‘The American Nightmare: Horror in the 70s’ in Horror, the Film Reader,