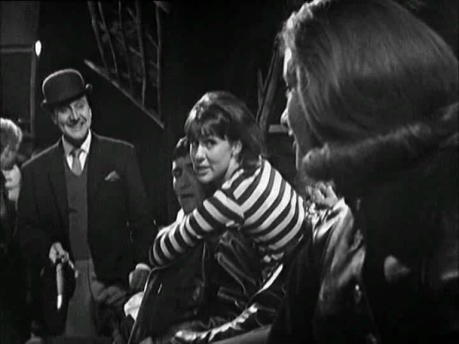 Season 3 of The Avengers begins moving the show farther from its noir roots and into the stranger realm of spy-fi fantasy and pastiche. While Build a Better Mousetrap would not become one of the episodes re-adapted to the candy-colored world of Emma Peel, it does indicate a slight shift in tone for the dynamic duo of Steed and Cathy. There are still the underworld noir elements at play, including the presence of a motorcycle gang, but the characters are broader and the British quirkiness more apparent.

Steed and Cathy head to the English countryside to investigate some strange goings-on in a small English village. A nearby atomic energy plant appears to be causing mechanical failures within the radius of the village, but Steed of course thinks there’s more to it than that. The failures happen to coincide with the presence of a youthful motorcycle gang on the weekends, who have also run afoul of two charming old ladies living in a rebuilt watermill. So, Cathy joins the gang and Steed investigates both the atomic plant and the mill, with predictably bizarre results.

Build a Better Mousetrap trades on a combination of bizarre British character types and audience assumptions about them. The innocent old ladies could be behind the disabling of mechanical devices and the thuggish motorcycle crew might just be having a good time. The secondary characters are well-drawn and enjoyable to watch, from the slightly creepy landlord of the local pub to a former army colonel and his daughter (the latter keeps hitting on Steed in a very strange manner). Things are not all as they seem and misunderstandings between characters increase the stakes. The mystery lies not so much in who causes the mechanical failures (that becomes evident fairly early on), but why and how.

This episode includes some of the best visual jokes in The Avengers, with more than a few scenes that allow our main characters to pop. Steed is amusingly out of place amid the young motorcycle gang, while Cathy, in her leather jacket and boots, fits right in. Cathy enjoys herself at motorcycle rallies and dance parties, while Steed has an entertaining sequence as a representative of the “National Distrust,” insinuating himself into the good graces of the two old ladies. The tight pacing and enjoyable character vignettes keep everything fun and breezy, although there are darker elements at work here too.

An absurd, entertaining piece of television, Build a Better Mousetrap ranks right up there with the top episodes of Season 3.