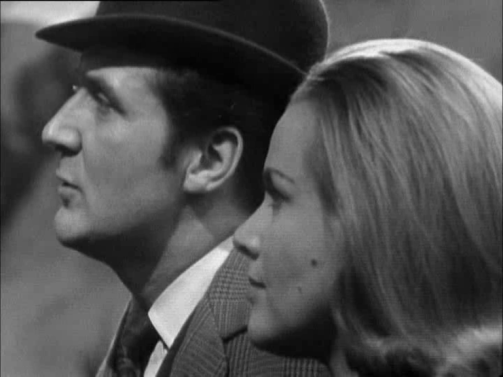 I had intended to try to keep to the order in which these episodes aired, but I cannot hold my tongue about one of my favorite Avengers episodes.

In Mandrake, Strange things have been going on in the graveyard of Tinby, including the burial of an abnormal number of men who were never in Tinby in their lives. Steed’s interest is piqued with the death of a work colleague and his burial in the same graveyard. Steed and Cathy set about investigating the deaths, which leads them into a seedy world of a two-man Murder Inc., made up of Dr. Macombie (John Le Mesurier) and Roy Hopkins (Philip Locke), who help heirs to organize the murder of prominent men.

Mandrake has so much to recommend it, I don’t know where to begin. The secondary cast elevates the episode – Le Mesurier and Locke are both excellent character actors in their element here (they pop up in earlier and later episodes, making them among the most dependable doppelgängers in the series). The addition of Annette Andre as Judy, a shopgirl who works for Hopkins, provides some of the most charming repartee in the episode. She and Steed develop a quick flirtation with such easy, light chemistry it almost makes one wish that Andre had come back a few more times (she does crop up in a much later episode of spin-off series The New Avengers, but has no scenes with Macnee).

Mandrake also balances its two leads admirably, giving Steed and Cathy plenty to do together and separately. Cathy goes off to interview the vicar of the Tinby church where the murdered men have been buried, while Steed trails Hopkins and flirts with Judy. Steed roughs up the son of his old friend, and Cathy has an exciting graveyard fight with the local gravedigger – a fight which ended with Blackman accidentally knocking out her opponent. While there’s a bit of a dearth of Steed and Cathy banter to be had here, it’s more than made up for by the exchanges between our leads and the secondary characters.

Sharp and tightly written with excellent pacing, Mandrake really stands at the top of the Cathy Gale series, and is arguably one of the best Avengers episodes period.

One thought on “The Avengers: Mandrake”