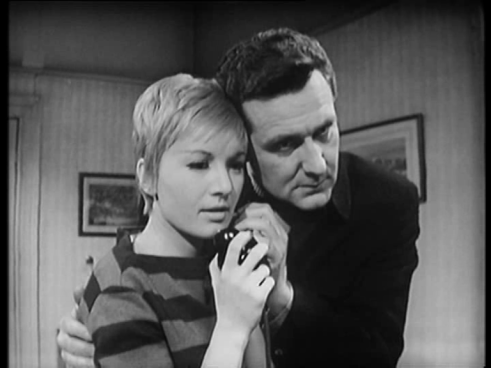 Of the handful of Avengers episodes with Venus Smith, School for Traitors I suppose is one of the better entries. This is unfortunately not saying much, as Venus has the distinction of being one of the duller partners to occupy space beside Steed. However, at least in this episode she demonstrates a modicum of competence.

The plot finds Steed at a university following the suicide of a man he went to school with. Miss Smith is on hand in some sort of singing capacity; I’m not entirely sure why she’s performing jazz numbers in a university quad, but at least we don’t have to suffer through more than snippets of songs. Posing as a literary scholar (one of Steed’s many wish-fulfillment covers), Steed uncovers a sinister espionage ring blackmailing students into nefarious activities.

As per usual with these early episodes, this one is decidedly spotty. The bright spots are Melissa Stribling as Claire Summers, a vicious femme fatale if ever there was one, and John Standing as undergraduate Ted East. The rest of the twists and turns are largely predictable when they’re not totally unbelievable – it’s difficult to imagine that any of these undergrads or lecturers would be so easily duped into committing crimes.

I make fun of Venus Smith, but she’s actually not annoying in School for Traitors. There are some lovely little bits with Steed that highlight Venus beginning to get into the fun of being a secret agent. Patrick Macnee is as enjoyable as ever, a breezy and dangerous gentleman often seen without his iconic bowler and brolly in these early episodes. The repartee is easy between him and Venus, but there’s little of that crackling tension that will characterize his relationships with Cathy Gale and Emma Peel. Venus is far too much of a little kid playing spy to be taken seriously.

One of the elements I’ve come to like about the early Avengers episodes is the low-tech nature of live television. The actors do their own stunts, which in itself can be impressive, and there’s the added excitement of the occasional mistaken line or ad-lib. In one memorable scene, Julie Stevens goes up on her lines in introducing Steed and Macnee takes over with a smile, covering for her and interjecting some of his own humor. It’s been said that Macnee created Steed almost from scratch, and School for Traitors highlights how much of his personality he injects into the character.

So while most Venus Smith episodes are strictly for those dedicated Avengers fans, School for Traitors remains one that I return to from time to time. It’s just good fun.