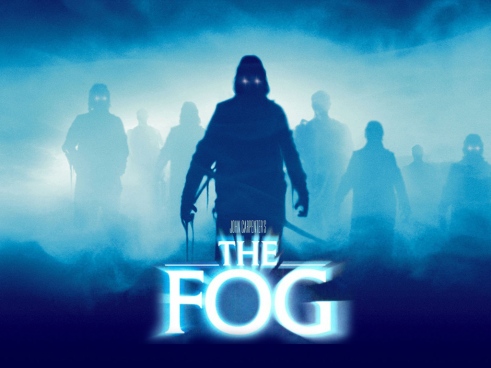 There are certain gaps in my horror film education that I have struggled to fill. While I’m very good on Roger Corman, James Whale and Tod Browning, I have missed out on the major works of directors like Wes Craven, Dario Argento and, I realize, John Carpenter. Some of this is due to a total lack of interest in slasher films or most body horror, but as a horror fan I cannot run forever. Some films I simply have to see.

The Fog is one of those Carpenter films that I heard good things about and never got around to watching until now. I’m pleased that I did so. It all begins with Mr. Machen (John Houseman) telling a scary story to kids at a campfire. The story sets up the rest of the film, which plays like an urban legend. The town of Antonio Bay suddenly goes crazy one night, with car alarms going off, pieces of stone falling out of walls, and the ground rattling with an unmeasured earthquake. Meanwhile, a glowing fog rolls in across the water, traveling against the wind. The fog, as Mr. Machen tells us, once caused the deaths of ship full of people, crashing them against the rocks in the Bay 100 years ago on that very night. Now it has returned to Antonio Bay, and it brings with it a strange and terrible vengeance.

The Fog really could have gone either way. The notion is a good one – a traveling fog that envelops and murders – but it could easily have slipped into hokey special effects and people running away from a cloud. Carpenter is a better filmmaker than that, thank God. He instills a sense of otherworldly terror in the fog – there are ghosts that come with it, but for the most part they are glimpsed in shadow and profile, announced by a pounding on the door or wall, proceeded by fog and haze. The horror lies in the build-up, not the execution, and there are few filmmakers from the 1980s so capable of building suspense as John Carpenter.

The cast helps too. Jamie Lee Curtis is on hand as a sweet young hitch-hiker who just happens to wind up in Antonio Bay. Her mother Janet Leigh puts in an amusing appearance as one of the town pillars. Adrienne Barbeau is the local radio DJ and as close to a final girl type as we’re going to get. There’s also Hal Holbrook playing a drunken priest who discovers the true story of the founding of Antonio Bay, and the reason why the fog is … really pissed off.