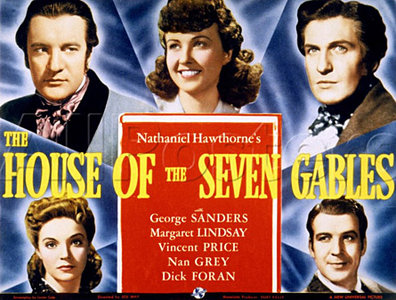 Although I am a rather jaded film viewer, there are times when a movie still has the capacity to surprise me. It’s even more remarkable when that movie was made all the way back in 1940, based on a novel written about a hundred years before that.

I really should not have been so surprised at The House of the Seven Gables. After all, it stars two of my favorite sinister gentlemen: Vincent Price and George Sanders. They play brothers (of course they do), one good, the other bad. In the surprise of the century, it’s Mr. Price who gets to be the good guy as Clifford Pyncheon, the eldest son of the Pyncheon family. He resides in the House of the Seven Gables with his father Gerald (Gilbert Emery) and his cousin Hepzibah (Margaret Lindsay). Things are not well at Seven Gables, though; Gerald and the younger son Jaffrey (Sanders) have managed to squander the family fortune and Clifford plans to sell Seven Gables and go to New York with his fiancee Hepzibah (this is the Victorian era: that’s totally cool).

Jaffrey’s not a nice man, though – he’s a greedy little rat who believes that there’s a secret treasure hidden somewhere in Seven Gables, and therefore does not want to give up the house. The battle rages between Jaffrey and Clifford, who wants to be out of the house and out from under the weight of his family history. Things go south for poor Clifford when his father suddenly dies during a verbal fight and his brother accuses him of murder. 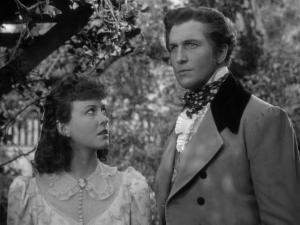 The whole of the story is wrapped up in the Pyncheon family history. The first Colonel Pyncheon falsely accused a man of witchcraft in order to obtain his land. Later crimes are committed by the powerful patriarchs of the family – a fact which only Clifford wants to admit to. Clifford and Hepzibah try to escape from the cycle, only to be pulled back in by forces of greed and bitterness.

The actors  anchor The House of the Seven Gables. Price and Sanders are  stars we’re used to seeing in older incarnations, but here (at least at the beginning) they’re young and vibrant. Price especially carries his role off with great aplomb, first as the young joyful Clifford desperate to begin a better life, and then as the down-trodden older man released from prison after almost 20 years.  It’s a testament to Price’s acting ability that this will be the same man who creeps us out in The House on Haunted Hill. In The House of the Seven Gables, he’s never been more likable or attractive.

Sanders has less to do – he does not get to exercise his considerable smarmy charm, although his sardonic baritone is in full force here. He’s an interesting counterpoint to Price’s earnestness, even if the character he plays is largely one-dimensional.

Margaret Lindsay likewise deserves kudos for her role as the patient Hepzibah, who loves Clifford so deeply that she never stops trying to obtain his liberty. Lindsay goes from being a joyous young woman to an embittered matron, but she does not lose either her kindness or her passions. Lindsay gives her a gentility often missing in broader caricatures of the ‘old maid’ – she is a decent, loving person, choosing to live a life of solitude rather than give up on the man she loves. The reunion of Clifford and Hepzibah is perhaps one of the most moving and understated scenes I’ve ever experienced, a result of excellent performances on both the parts of Price and Lindsay. The entire film is worth it just for that one moment of beauty.

I’m surprised and happy that I can recommend this film as highly as I do. While by no means a perfect movie, it’s a remarkably effective one. A Victorian melodrama as only silver-screen Hollywood can make them, it nevertheless transcends the usual sentimental bluster through an excellent cast and a good script. It is moving because it seems so very human.