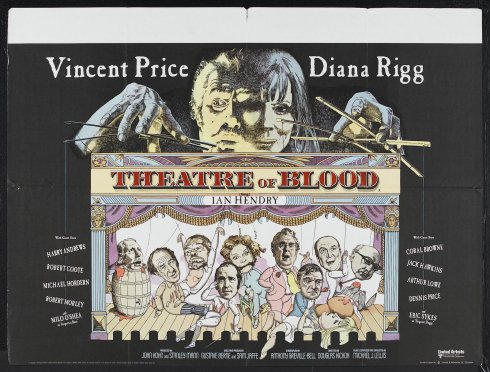 “It’s him all right. Only Lionheart would have the temerity to rewrite Shakespeare!”

Why was I not informed of this movie’s existence? Have I been so out of the loop? I’d heard of it, naturally, but why did not someone tell me of the exceptional level of awesomeness contained in this one bloody little package? WHY?

I have no one to blame but myself.  At least I have rectified the situation.  This movie has everything: Vincent Price, a cross-dressing Diana Rigg, Shakespeare, dead theatre critics, blood EVERYWHERE.  And, remarkably enough, it’s actually a quality piece of camp cinema.  God, how I wish I’d seen it sooner.

It’s quite similar to The Abominable Dr. Phibes, but with a better script and production values.  Price is once again the sympathetic madman taking revenge on those who wronged him  This time his lovely assistant is his daughter Edwina (Diana Rigg – I’m a straight woman, but my God is she sexy), helped along by a pack of derelicts in the best Shakespearean tradition.  Price plays Edward Lionheart, a ham actor presumed dead who murders his critics by way of Shakespeare. And if you know your Shakespeare, you know there are some really spectacular deaths.

But Theatre of Blood stands a decapitated head about The Abominable Dr. Phibes, and then not just because of the production values. 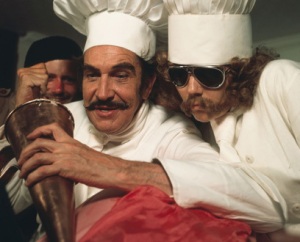 The cast is a who’s who of British thespians from the 70s: Robert Morley, Coral Browne, Ian Hendry, Jack Hawkins, Dennis Price, Harry Andrews.  If you don’t know the names, you’re likely to recognize the faces. Price and Rigg in particular are more than game for their parts, gnawing the scenery while spouting some overblown Shakespeare.  It helps that both are quite capable of handling the language.  Seeing great actors over-act Shakespeare on purpose is a rare pleasure.

The deaths make better sense than The Abominable Dr. Phibes; the ‘villains’ are quite sympathetic, particularly when their victims are painted in such unflattering light.  I began to think that playing a theatre critic that is venal, snarky and vitriolic is a perfect actor’s revenge.  It’s also delightful for the audience.  The violence is over the top, and in places quite surprising for the early-70s, but it’s off-set by the camp.

At times the Shakespeare angle is strained – the murder from Henry VI Part 1 is hilarious, but hard to place.  There’s a patch in the middle, as Ian Hendry recounts Lionheart’s death, that suffers from inaction.  We’re all just waiting for them to get back to the killings.   At times the film suffers from a confusion of tone – the seriousness of the police jars with the apparent glee that the villains (and the camera and the audience) take in the murders. I did find myself wishing for a more entertaining police investigation a la Trout/Waverley, but perhaps I’ve just been spoiled.  And the ending, while powerful, fell just a little flat, and felt just a little unfair.

But these are minor quibbles in a movie that I loved from beginning to end.  It’s a delicious film that doesn’t overdo the violence – at least, not without injecting it with a heady dose of humor.  I enjoy films where the actors seem to be having fun, and everyone was having fun.  Theatre of Blood is a Jacobean revenge tragedy played the only way Jacobean revenge tragedies should be played: for laughs.